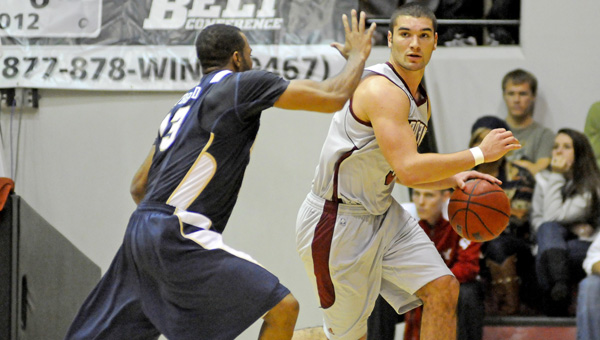 Revenge they got as Troy defeated ETSU in front of a home crowd, 79-71, Tuesday.

“I just wanted to go out there and beat them,” Weathers said. “We wanted revenge.”

This time around was different.

The Trojans (3-3) scored early and often jumping to a 24-16 advantage on an Emil Jones three poiter.

Troy would take advantage of the long ball. 18 of the Trojans first 24 points came from behind the arch.

“I thought (shooting well early) was huge,” Emil Jones, who scored 14 points on the night, said. “Once one person hit a shot everybody got comfortable.”

Neither team went on a lengthy run but the much subdued Trojan defense kept the Buccaneers honest in the paint.

ETSU (4-2) scored 44 points from close range in the last meeting. They would tally just 26 Tuesday.

A good portion of that success in the low post was due to the play of forward Tim Owens.

“I thought Owens did a great job,” head coach Don Maestri. “He was key on stopping their inside game.”

Owens would score five but block two shots and shot 5-for-6 from the free throw line.

In the past two games, Troy has backed away from the high-pressure defense they began the year playing.

“We gave up so many easy points against them last time we just had to get out of pressing them,” Maestri said. “I don’t think we’re going to press much longer.”

ETSU pulled to within four with 11:25 remaining in the second half when Alan Jones drilled a three pointer to quickly squash the Buccaneer run.

East Tennessee made it a five point game with 6:30 left in the contest before Justin Wright found his rhytm.

Wright would score 11 points in that time span including two three pointers.

“He hit some good shots for us down the stretch,” said Maestri of Wright, who has been nursing a sore back. “If he’s healthy, his potential is untapped.”

Wright led the Trojans with 15 points.

With the win Maestri earned his 488th career victory.

Next up for the Trojans is Miami-Ohio on Saturday at home. Tip is set for 7 p.m.