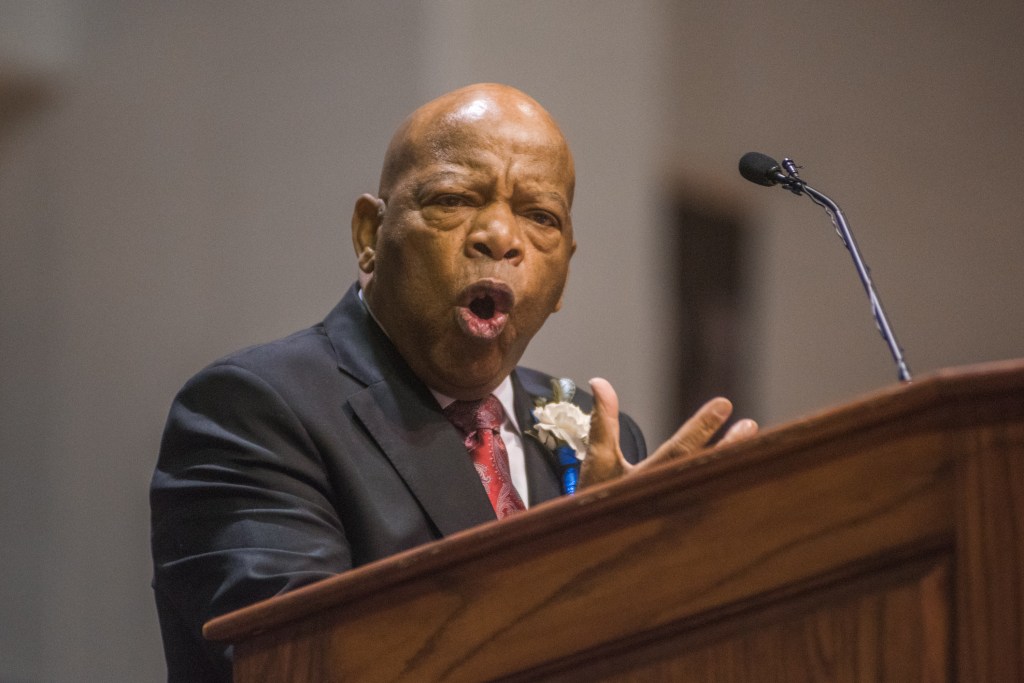 Leaders throughout Pike County mourned the death of “the boy from Troy” John Lewis, who spent his life battling racial discrimination.

Lewis, 80, died Friday after a months-long battle with pancreatic cancer.

Rights activists, politicians from both parties and many other people touched by the legacy of John Lewis mourned the congressman and pillar of the civil rights movement, lauding the strength, courage and kindness of a man whose lifelong struggle against racial discrimination took him from a bridge in Selma to the nation’s Capitol.

Lewis was referred to as “the boy from Troy” by  Dr. Martin Luther King Jr. Lewis had worked with King to found the Student Nonviolent Coordinating Committee to help plan the 1963 March on Washington. Later, he marched alongside King in the “Bloody Sunday” voting rights march from Selma to Montgomery and suffered a cracked skill at the hands of police officers trying to block the way.

“John Lewis was a giant in Troy and a giant among men,” said Lamar Higgins, Troy University Board of Trustees. “He become a standard bearer for justice and equality. He has long raised his voice for the underserved and the disadvantaged. He was leader in the Civil Rights Movement and continued to be a leader with a positive influence throughout his life.”

Lewis often recalled his upbringing in the segregated South, including how he was denied a library card because the library was for “whites only.” That upbringing led to his lifelong effort to destroy segregation. After the Civil Rights Movement, he went on to make a career in politics, representing Atlanta in Congress for more than 30 years, all the while imploring people to press for justice – to make what he came to call “good trouble, necessary trouble.”

“(He) didn’t believe things couldn’t change and he changed them,” said Troy Mayor Jason Reeves. “Troy, Alabama, the United States and the world are better because John Lewis was born on that farm in Northeast Pike County and lived a remarkable life. Our prayers go out to his family and the millions he touched through humble courage, love and a spirit that would never give up.”

Reeves grew up on a small farm in Northeast Pike County, and his life intertwined often with Lewis’. “ There was not a paved road between there and the farm John Lewis grew up on and preached to his chickens. The summer he ran for Congress, I played baseball for his brother Grant (Henry) and with his nephew, Darius,” Reeves said. “The Lewis family has always meant a great deal to me and my family and John Robert Lewis meant a great deal to the world.”

In 2018, as part of the Alabama Bicentennial, the City of Troy declared John Lewis Day on Feb. 3, as a tribute to Lewis and his significant work for civil rights. As part of the celebration, a historic marker in his honor was unveiled at the Troy Public Library.

“It was a day of jubilation and emotion, particularly when Congressman Lewis spoke about being able to return home to applause and appreciation,” said Councilwoman Stephanie Baker, who served on the Reunion Troy Committee that coordinated the event. “I am honored to have spent time with him and that day and will always remember his humility, kindness and appreciation.”

Brundidge Mayor Isabell Boyd said, as Lewis’ death is being widely felt, her thoughts are especially with his family here in Pike County. “Their loss is very personal,” she said.

Lewis was a graduate of Pike County Training School in Brundidge.

“He was one among us and Brundidge held a special day in his honor and named a street for him,” Boyd said. “I commend John Lewis for all he has done to make our country a better place for all of us. He was a great man who did great things.”

“Congressman Lewis was a great leader who worked to bring people together for good,” Moultry said. “We are a better people, a better city, a better country and a better world because of his efforts.”

In Washington, D.C., The House on Monday stood for an emotional moment of silence for Lewis. Speaker Nancy Pelosi gaveled the House to order, calling on “all who loved John Lewis, wherever you are, rise in a moment of silence in remembrance of the conscience of the Congress.”

Several people on the dais wept as the House stood in silence, heads bowed. When Pelosi tried to move on, those gathered interrupted with sustained applause.

“Our hero, our colleague, our brother, our friend received and answered his final summons from God almighty,” said Rep. Sanford Bishop, the dean of the Georgia delegation.