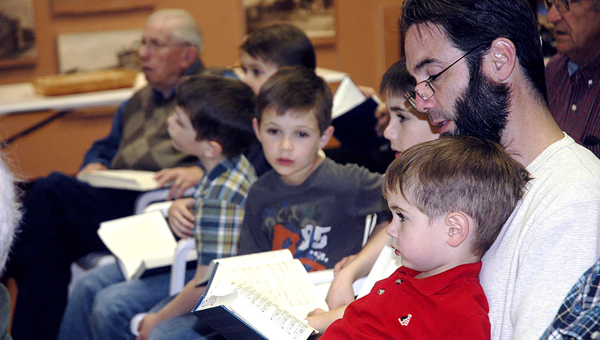 Kevin Eddins and his sons Ezra and Eli joined in the Sacred Harp Sing at the Pioneer Museum on Saturday.

The sounds of a joyful noise could be heard inside and outside the Pioneer Museum of Alabama all day Saturday.

The museum played host to the Sacred Harp Sing that is held annually in February in the museum’s indoor village.

Nearly every chair in the hollow square was taken as were seats along the side, making the 2014 singing one of the largest at the museum, said Janet King, secretary for the group.

King said most of those who participate in the Sacred Harp Sing at the museum also sing together at other locations, from Andalusia to Montgomery.

King said people of all ages and from all backgrounds sing four-note and seven-note music.

Mary Howard of Troy has been singing Sacred Harp music since she old enough to know what singing was.

“My mother sang Sacred Harp so, when I got old enough to sing, I sang,” Howard said, with a smile. “I was singing Sacred Harp before I could read. It’s minor music and Scared Harp is music that you have to sing from the heart. You can’t sing it any other way.”

Howard led several songs Saturday but she would rather “just sing” than lead.

“I would rather follow and stay in my seat and keep time,” she said with a smile. “But I love to sing Sacred Harp and I like to sing seven note, too.”

Howard brought her great-granddaughter, Nevaeh Howard, along but she didn’t sit in the square.

“She’s just learning and I think that’s important because a lot of the old heads are going on and we need some young people to step in and keep the music going,” Howard said.

He brought his wife and children along Saturday and he had five sons singing on the tenor side of the square with him.

Eddins said he was introduced to Sacred Harp singings several years ago in New Orleans. He found the style of singing interesting and later bought a CD of Sacred Harp music.

“I like the old style of singing and the words are so scriptural,” Eddins said. “I want my children to learn about Sacred Harp singing so they can appreciate it and sing it. I like to sing Sacred Harp music and I want my family to be a part of my enjoyment of it.”