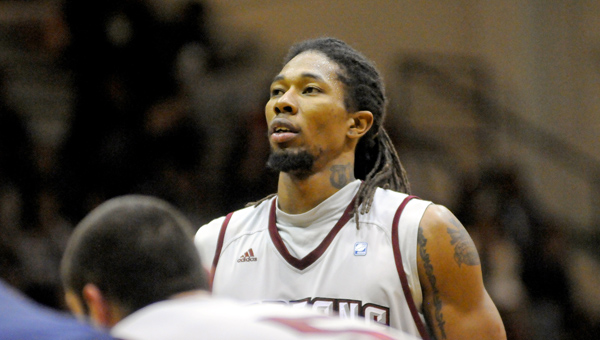 Troy forward Tim Owens is making the most of his opportunities.

In high school, Owens was far from a blue-chip recruit, mainly because he didn’t even play high school basketball. At the time, he was concerned with making a living working at the local Dairy Queen in his hometown of Orlando, Fla.

“I was in high school and I was already living paycheck to paycheck,” Owens said. “I realized this isn’t the way to go. That’s when I got more serious about my grades.”

Owens played on the driveways and local courts of Orlando outside of school until, after graduation, he began to play in the area YMCA league.

It was in that league he met Marcus Manuel.

Manuel, an athlete promoter in Florida, helped Owens break onto the college scene.

“He asked me one day who I was playing for and I told him I no one,” Owens said. “He got me into a college showcase in front of a bunch of coaches and that’s when (Seminole State College) saw me play.”

At Seminole State, Owens was presented with the opportunity to learn the game from some of the top athletes in the state. Playing in front of the 6-foot, 9-inch forward were two JUCO All-Americans in Marvell Waithe (Arkansas) and Bernard James (Florida State). Owens blocked 70 shots that season, the fifth highest total in the state, and was named second team All-Mid Florida Conference player.

It was in that season that Owens was able to fine-tune his game and catch up on the learning curve of college basketball.

“Looking back I was really far back (on the learning curve),” he said. “The main reason I got a look was because I was a defensive player. I couldn’t shoot free throws, I couldn’t even make a layup.”

After the 2008-09 season, Seminole State dropped its basketball program leaving Owens again searching for a place to play.

“Here I am, I finally get into school and they shut the program down and now I’ve got to find somewhere else to play,” Owens said. “The good thing is I had a good year so I had a bunch of schools recruiting me.”

Owens chose Tallahassee Community College, which is in one of the premier junior college conferences in the country, the Panhandle Conference.

“I was told that was one of the best conferences in the country,” said Owens. “The competition level and the players in the conference are really good. I felt confident to go play there.”

While at TCC, Owens slipped onto Troy’s radar.

“We watch a lot of Florida junior college games,” Troy head coach Don Maestri said. “He didn’t start but he jumped out because he played hard. He just looked like he had the potential to come in and help us.”

Coming from a Tallahassee, a city known for its wild college nightlife, Owens felt Troy was a perfect place to mature and direct his attention towards his degree.

“The thought was in my mind whether to go Division I or Division II,” Owens said. “I felt like on my visit (to Troy) I could come here and focus more on school and not have as many distractions.”

In his junior year, Owens was not expected to start but did make significant contributions in his first season with the Trojans. Owens played in 26 games during the 2010-11 campaign, all off of the bench. He shot 52 percent from the field in his 8.8 minutes per game and grabbed season best nine rebounds against Utah State on Dec. 23.

“He has a great attitude,” Maestri said. “He comes everyday to practice and never slumps off.”

Thus far this season, it appears Owens has made tremendous strides from where he started in the YMCA gymnasiums of Orlando. The senior is shooting over 70 percent from the free throw line and 52.6 percent from the field in 20.7 minutes per game.

His days working paycheck to paycheck at the fast food joints seem to behind him as well. Owens is set to finish his degree in Human Services.

“He will have opportunities he would not have had without that college degree,” Maestri said. “I’m sure that paycheck thing will improve once he leaves here.”