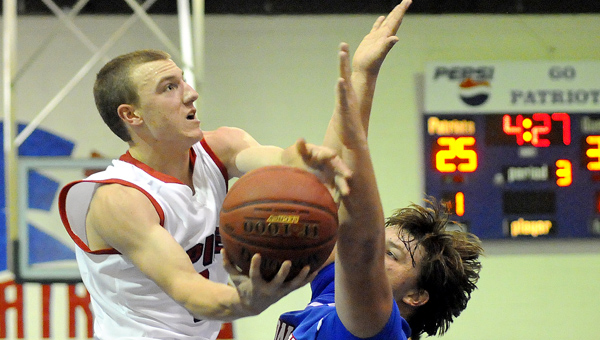 Coming off a heart-breaking overtime loss on the road to Patrician, Pike Liberal Arts head coach Bob Pickett was anxious to see how his team would respond. For three quarters, he was pleased.

“I thought we played hard, Pickett said. “Macon can shoot from the perimeter. We couldn’t overcome the deficit in the second half.”

Pike trailed by just nine at halftime and traded baskets in the third quarter before the Knights went on a 9-1 run to open the fourth period.

That coupled with a 12-2 run late in the contest sealed the 66-41 victory for Macon-East.

“Most of that was my fault,” Pickett said. “We went to the press and they pulled away from us.”

The Patriots didn’t help themselves either shooting just 2 of 16 from three-point range.

“We had an off night shoot,” said Pickett. “We just couldn’t hit shots tonight. We’ll get better.”

Pike did shoot 46 percent from the floor but struggled to get good looks most of the night.

In the first quarter with Pike trailing 11-7, Stewart Pinckard hit a mid-range jumper to pull the Patriots to within two.

Tanner Free then knocked down a pair of free throws to tie the game. Chandler Avant followed with a lay up to give Pike a 13-11 lead. Unfortunately, it would be the team’s last.

Just before the end of the period, Macon-East began a 19-5 run to stretch their lead to 12. Avant would hit a lay in at the buzzer to cut it to nine.

Out of the break, the Knights picked up where they left off.

A three-pointer from Hunter Brooks coupled with six fast break points opened the margin to 37-25.

After a timeout, Pike attempted to force turnovers by adding pressure. Macon would have no problem breaking the Patriot press and quickly tiring the thin and youthful club.

“We’re looking for more scorers,” Pickett said. “We’ve got to find a fifth and sixth shooter.”

As Macon rotated 10 players, Pike was limited to just seven.

Of the five Patriots starters, three were sophomores including point guard Chandler Avant.

Overall the free throw line was kind to the Patriots as they made 13 of 21 attempts.

“These guys have worked hard at the free throw line,” Pickett said.

“Overall, I think after a week off we played OK. We’ll get in more of a rhythm once we start to play more often.”

Pike travels to Opelika to take on Lee-Scott today.