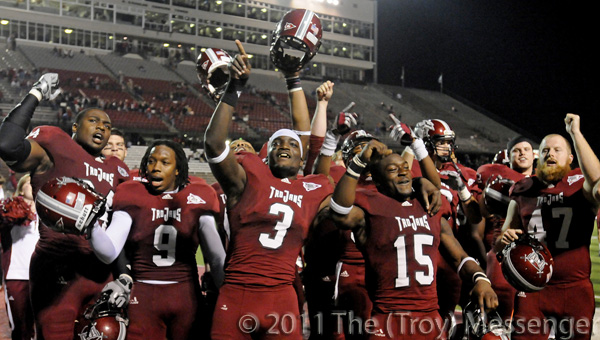 Coaches will often talk about the three phases of football, offense, defense, and special teams.

The third phase directly helped Troy win its final home game of the season over FAU, 34-7.

The Owls (0-10, 0-7) started eight drives from inside their 20-yard line. Combined with Corey Robinson’s 396-yard, three-touchdown performance, the Trojans salvaged at least their season in their home stadium.

“When the offense is staring at the whole field and you make them go that long distance, the possibility of error increases.”

Punter will Goggans pinned the Owls three times inside the 20 and punted for an average of 38.4 yards.

The Trojans (3-7, 2-4) scored first on a 27-yard Michael Taylor field goal just 3:17 into the second quarter. Later in the frame, Khary Franklin hauled in his first career touchdown reception to expand Troy’s lead to 10-0.

Robinson, who threw for his second highest total in his career, felt happy and relieved to end the Trojans five-game losing streak.

“It feels so much better,” he said. “ I think we woke up from the nightmare last week and played a lot better.”

Robinson would find Eric Thomas, who got behind the Owls defense, on a 57-yard scoring strike to open the Trojans lead to 17-0.

In what has seemed to be a theme for this Troy team, FAU was able to move the ball quickly down the field just before half, putting together an 8-play, 72-yard drive capped by a Alfred Morris 10-yard run.

Troy’s defense, which has allowed over 500 yards in its previous three game, tightened in the second half giving the Owls just 43 yards passing to close the game.

“We executed our game plan to the fullest,” safety Bryden Trawick said. “That was evident in what happened out there today.”

The Trojans played more zone defense, helping keep the Owls playmakers from slipping behind the secondary.

“I’m really proud of the defense,” Blakeney said. “You just don’t understand how difficult they are to defend.”

Offensively, Thomas tied a Troy FBS season-high with his second touchdown catch of the day and ninth of the season in the fourth quarter on a 25-yard strike from Robinson.

“We were moving the ball and getting some big play,” he said. “We just did the little things right.”

Thomas finished with six catches for 128 yards to go with his two scores.

With the win, the Trojans will finish 3-2 on their home turf. Troy has not posted a losing record at Veterans Memorial Stadium since 1989, two seasons before Blakeney become head coach.

“We weren’t perfect today but we flew around and made plays,” linebacker Brannon Bryan said. “It feels good to send these seniors out with a win at home.”

The Trojans will travel to play Western Kentucky and Arkansas State in the final two games of the season.

“I’m thrilled for these guys to get a win,” Blakeney said. “It doesn’t mean we are going to win the last three or that we’ll win the next one, but it means we’ll have a much better frame of mind approach to work.”

Next week’s kickoff against Western Kentucky is set for noon.