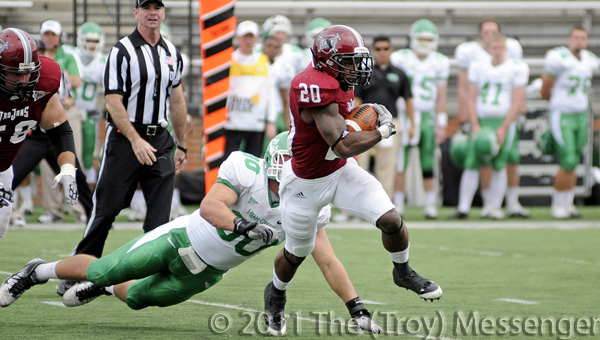 Troy running back Shawn Southward (20) runs the ball past North Texas defensive tackle Ryan Boutwell (90) during the first half of a NCAA football game in Troy, Ala., Saturday, Nov. 12, 2011. (Messenger Staff Photo/Thomas Graning)

Having suffered their fifth straight loss this season last week against in their homecoming to North Texas, the Troy Trojan (2-7, 1-4) football team will not be bowl eligible for the first time in five seasons. With an excellent track record of success and this year’s Sun Belt conference title seemingly out of reach with only three games left, it has left many Troy fans asking, “What is there left to play for this season?”

The Trojans, this season, are in a situation that is unfamiliar to them and their fans; rebuilding and recovering. Troy’s focus now will turn to rebounding in their final three games to gain momentum going into the offseason. Their rebuilding will begin as they host the Florida Atlantic Owls (0-9, 0-6) in their final home matchup on Saturday as a part of Troy’s Senior Night.

“We have to take the next best thing, which is winning the next game and winning out,” said head coach Larry Blakeney. “We have about three guys across the board that have started before this season, so we’re a very young team. That may be an excuse but we do analyze these things. Excuses are not what we need to be discussing, we need to be discussing how to get better and how to win.”

Being senior night for the Troy, the Trojans will have that playing to their advantage as motivation against FAU.

Florida Atlantic comes in looking for the same answers as Troy as they enter the matchup on a nine game losing streak this season. With only two conference games remaining, the Owls will be looking to gain momentum as they send out head coach Howard Schnellenberger who has announced his retirement following this season.

The Owls currently sit at the bottom of the Conference standings in ninth place with Troy just above them in eighth. A victory over the Trojans would greatly help the Owls on their way to not finishing the season winless and last in the conference.

The Owls have beaten the Trojans on their home turf before, back in 2007, however it was Troy last season who knocked off the FAU in Boca Raton, Florida to secure their fifth straight conference title.

“They have to come and play just like we do,” said Davis “They’re record is not appealing but neither is ours, but they’re also going to fight for their coach so they will have an attitude about them. A few guys may overlook them but no one who is going to have an impact on this game will overlook this game. We’re going to come out and do our best and get a win.”

Even though the game will be in Trojan territory, they will have to face the elements of disenchanted fans and the effects of a student body notorious for leaving campus on weekends, that have made their out-of-town plans for the upcoming Thanksgiving holiday.

“Anytime you have a game at home, we have recruits in here and people here who we want leave a positive spin on things,” said Blakeney. “I’m worried about this football team and setting the stage for us to rebound and get back to where we were.”

Kickoff for Troy is scheduled for 2:30 pm on Saturday on Larry Blakeney field.

Will Starling will be coming home in 2012. The former Pike Liberal Arts standout signed a national letter of intent... read more