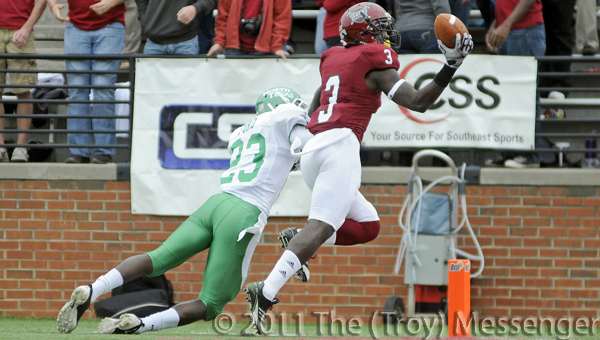 At 2-7, Troy has little more than pride to play for in their three remaining games this season.

The Trojans will miss out on a bowl bid and will have a losing record fro the first time since 2005.

With little explanation for what has gone wrong, Trojan players and coaches are looking to use the contests they have left to prove they’re still a competitive football team.

Troy, with several underclassmen already contributing, will use the time to teach and help improve the young talent they have returning nest season.

“Our young guys are setting goal for themselves,” Davis said. “They are going to finish the season and get ready for next year.”

While none of the Trojans are throwing in the towel on 2011, sights are now set on constant improvement as well as picking up wins.

“We play good at times then bang, something happens,” head coach Larry Blakeney said. “We give up a big play. We’ve got to get better at that.”

Troy will take on Florida Atlantic in the Trojans final home game of the season, it will also be the last meeting between Blakeney and the Owls legendary coach Howard Schnellenberger.

Schnellenberger announced earlier this year that this would be his last season as Florida Atlantic’s head coach.

“I’ve knowing of him my entire career,” Blakeney said. “He’s a great offensive mind and very good at what they do.”

The Owls, who started the football program with Schnellenberger in 2001, are currently 0-9 but Blakeney knows he will be facing a talented team on Saturday.

“They’ve got some guys that can make plays,” he said. “If we don’t turn the ball over and don’t give up big plays we have a chance to beat them.”

FAU, like Troy, has played a brutal non-conference schedule with road trips to Florida, Michigan State and Auburn. The Owls were outscored 115-17 in those three matchups.

The Trojans are 7-1 all-time against Florida Atlantic and defeated the Owls 44-7 last season.

The Trojans have never lost more than eight games under Blakeney, something Davis feels pride and motivation can help avoid.

Troy will hit the road for the final two games of the season against Western Kentucky and Arkansas State.