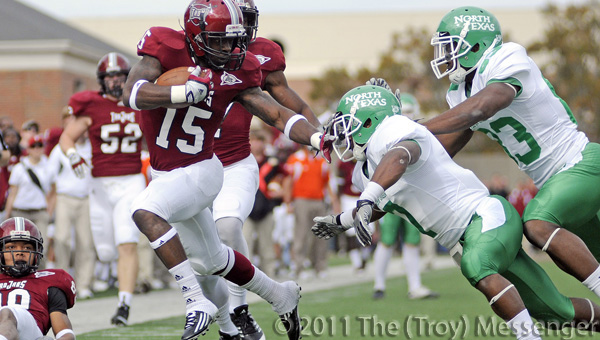 Troy running back Justin Albert (15) returns a punt past North Texas defenders during the first half of a NCAA football game in Troy, Ala., Saturday, Nov. 12, 2011. The run was called back due to a penalty. (Messenger Staff Photo/Thomas Graning)

Troy’s defense continued to hemorrhage points Saturday as the Trojans fell in their fifth consecutive game, 38-33, to North Texas.

“They are a possession, ball control type team that throws just enough to keep you loose,” Troy head coach Larry Blakeney said. “They aren’t the first ones to give us trouble defensively.”

Quarterback Corey Robinson and the Trojan offense showed improved play but not the place it matters most … the scoreboard.

“Offensively, we made some strides,” Robinson said. “But we lost so it doesn’t even really matter until we win.”

In front of a homecoming crowd of 17,103, the defending Sun Belt champions assured themselves of a losing record and will not be eligible to participate in a bowl game for the first time since 2005. The Trojans have lost back-to-back home games for just the second time under head coach Larry Blakeney.

“We certainly are far from perfect and far from good enough,” Blakeney said. “These kids are trying to respond and they’re trying to help me lead this football team.”

North Texas (4-6, 3-3) scored early on a 15-yard run by Thompson in which he slipped a couple of tackles en route to the endzone.

Not to be outdone by his counterpart, Robinson led the Trojans on an 11-play, 63-yard drive capped by a 4-yard rushing score, the quarterback’s first of his career.

After Dunbar, who is second on the North Texas all-time rushing list, left the game due to injury, Hamilton took over.

The senior took his fifth carry of the game 52 yards for a score in the second quarter to extend the Mean Green lead to 17-7.

Troy would answer on their ensuing drive when Robinson floated a pass to the front corner of the endzone in the direction of a tightly covered Eric Thomas. Thomas, who was slightly behind the North Texas defender, reached out with his left hand, knocked the ball in the air before making a on-handed grab with his right hand in the endzone. The play was reviewed and the 31-yard touchdown was confirmed to bring Troy to within three, 17-14.

The Trojans would take the lead three minutes later. After Jimmie Anderson intercepted a North Texas pass at the Mean Green 37, Robinson hooked up with B.J. Chitty for a 5-yard scoring strike, the receiver’s first of his career.

The lead wouldn’t last long, however, as North Texas moved the ball easily on Troy’s defense to score on a 28-yard completion from Thompson to Ivan Delgado. The drive took just 1:37 off the clock.

“There’s a lot of things that’ll go into the game,” Blakeney said of the team’s reoccurring issues.

“Missed tackles, missed alignments, missed assignments. You try to give your guys enough ammunition on defense and there’s a lot of information and sometimes that information doesn’t get all the way digested.”

Troy’s offense would bring the game to within three in the third quarter when Robinson and Thomas, who caught three passes for 70 yards, found each other for the second time. This score was from 33-yards out to make it a 27-14 game.

Robinson would throw his fourth touchdown pass of the game, tying a career high, to Felton Payton in the fourth quarter. It was also Payton’s first career touchdown grab.

Robinson would finish 27-for-39 for 267 yards and the quartet of scores.

The Trojans will look to snap their five game losing skid at home next week against Florida Atlantic at 2:30 p.m.

The Trojans last lost six straight in 1982 and three consecutive home game in 1988.