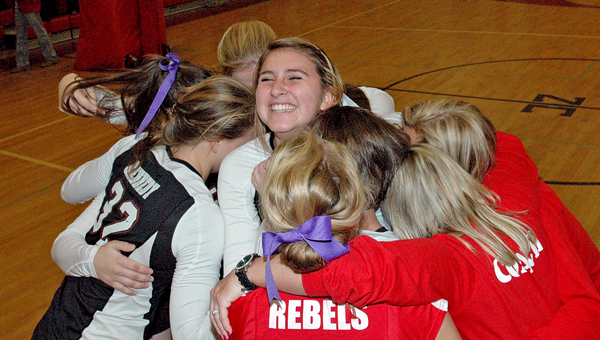 “We started the season strong,” head coach Shasta Barron said. “We had our ups and downs but these girls have battled through.”

The Rebels fell in sub-state last season but have torn through their 2011 schedule earning a 24-5 mark.

Barron, who started the volleyball program at Zion Chapel 10 years ago, feels her team can make a run in the state tournament.

“Our goal was to make it back to sub-state and advance,” Barron said.

Zion Chapel looked to be in control early as they quickly disposed of the Raiders in the first game, 25-18.

In the second game, HA jumped out to a 6-1 advantage. Bailey Spivey made a block on a vicious Rebel kill attempt to extend the lead to 11-5.

After a timeout, Zion Chapel began to find holes in the middle of Raider defense.

“We saw they were drifting back and that was leaving the middle open,” sophomore Whitney Rugg said.

The Rebels took advantage of the opportunity, pushing ball after ball to the middle of the court and finding the floor.

The Rebels brought the game back to respectability before Spivey again blocked two Zion Chapel attacks igniting the Raider team, the second scored for HA to make it 24-21.

Junior hitter Kennedy Sanders, who was battling a knee injury, became a key factor in the third game.

After Rugg, who finished with 35 assists, 21 digs, and five kills, again scored to the middle of the floor, Sanders blocked a Raider attack to tie the score 11-11.

Sanders would earn a kill to give the Rebels a 24-23 lead but HA would score three straight to win the game, 26-24.

Game four was back and forth with Zion Chapel clinging to a 12-17 lead HA went on an 8-2 run before costly unforced errors cost them the game. The Rebels would take the game 25-23.

“We got down a little after losing the fourth game,” Sanders said. “But we’ve been down like that before and battled back.”

The fifth and deciding game was all Zion Chapel as HA struggled to return strong Rebel serves. Although the Rebels had the game under control, Rugg never felt secure until play for the final point began.

“It was really the 14th point before I realized we were going to state,” she said.

As the final rally began, Rugg and the Rebels went to what had been working all night … a soft push to the middle.

Rugg received the pass and dispensed the ball softly over the net and into the center of the Raider defense.

“I’ve always thought about it,” Rugg said of earning the winning point in sub-state. “It’s the best felling in the world to know the point that sent your team to state come off of your hand.”

Alex Ketcham added 16 digs and three kills for the Rebels while Chyenne Nelson had 15 digs and five kills.

Zion Chapel will travel to Pelham Oct. 26 to take on the winner of the Woodland-Hatton sub-state match.