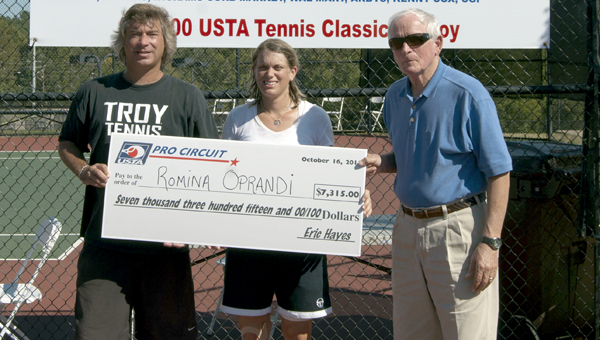 To say Romina Oprandi is playing solid tennis would be a bit of an understatement.

The winner of this year’s USTA Tennis Classic of Troy has mad a women’s singles finals appearance in the last three USTA Pro Circuit events while winning two.

Sunday’s championship match between top-seeded Oprandi and second seed Varvara Lepchenko was a redo of last week’s finals in the Women’s Pro Tennis Classic in Kansas City, MO, where Lepchenko took the title, 6-4, 6-1.

This time around, Oprandi was the dominate one winning 6-1, 6-2.

“She plays good offense and defense,” Oprandi said after her victory. “I knew it was going to be tough to win against her but I didn’t make as many easy mistakes.”

Oprandi said fatigue was a factor in last week’s loss to Lepchenko.This week, however, Oprandi made quick work of her opponents on her way to the championship losing only one set in her five matches.

“I played a lot of matches in the previous tournaments,” Oprandi said. “I got a little more rest this time and I think that helped.”

Lepchenko could have very easily played the fatigue card as she played five matches in the singles main draw along with four more in doubles play. Lepchenko and her teammate Mashona Washington lost in the finals of the doubles tournament to Elena Bovina and Valeria Savinykh, 7-6(2), 6-2.

Oprandi has had quite a run in the past three USTA events. On Oct. 2, she won the Lexus of Las Vegas Open and finished second to Lepchenko last week in Kansas City.

Currently, Oprandi is ranked 95th but will rise when the new rankings come out Monday.

The Tennis Classic of Troy concludes its ninth year with tournament director Eric Hayes already looking forward to next year.

“We are blessed to have the USTA as member of our community each year and look forward to hosting the Tennis Classic of Troy again in 2012,” Hayes said.