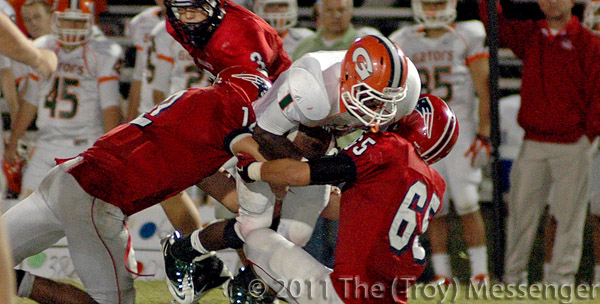 Pike Liberal Arts chances at the postseason were finalized with a 35-12 loss to Glenwood Friday night.

The Patriots will miss the playoff for the first time since 2006.

It looked to be a slugfest early as the teams traded punches in the first half.

Glenwood received the opening kick and on their first play quarterback Will Zeigler found a hole a and picked up 54 yards to the Patriot 19.

Pike’s defense would hold when Josh Starling made a tackle in the Gator backfield on fourth down.

Pike scored with 4:16 remaining in the opening quarter on a 20-yard Nick McLaughlin run but missed the extra point to take a 6-0 lead.

It wouldn’t take the Gators long to respond, however, as they return the ensuing kick 60 yards to the Patriot 20. Three plays later, Glenwood was in the endzone on a 2-yard Xavier Bond carry. Jake Wilson’s extra point put the Gators ahead, 7-6.

The Patriots, who were 0-for-11 passing last week against Ft. Dale, used the pass to move quickly down the field just before the end of the first quarter.

Starling connected with Taytom Barnes for again on 20 to get the Patriots just inside the Glenwood 30. Starling and Barnes hooked up again this time for a 28-yard scoring strike. A failed two-point conversion left Pike ahead by only five, 12-7.

When the first quarter horn went off so did the Glenwood offense. The Gators erupted for 21 points in the second quarter.

Bond scored on an 8-yard run then Zeigler found Chase Silvani for a 35-yard passing score to give Glenwood a 21-12 advantage.

“We’ve worked on that route all week,” said Pike head coach Steven Kilcrease. “Long pass plays have hurt us all year and it hurt us again.”

Zeigler would strike again this time on the ground for a 40-yard scoring sprint. Glenwood went into the locker room leading 28-12.

The Gator quarterback wasn’t done, however. With 3:02 left in the third quarter, Zeigler hit Will Allison for a 32-yard touchdown to ice the victory.

With the loss the Patriots fall to 4-4 overall and 1-4 in region play.

Starling and McLaughlin combined to complete 10 of 21 pass attempts for 146 yards.

The Patriots were held to just 116 yards rushing.

Pike will travel to take on Lee-Scott next week then wrap up the season at Tuscaloosa Academy.