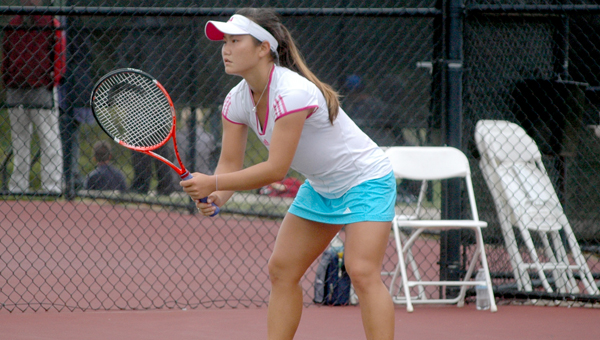 Grace Min readies to receive a serve in a match Tuesday at the Tennis Classic of Troy. (Photo/Wes Johnson)

Before the Tennis Classic of Troy began, tournament director Eric Hayes hoped spectators would appreciate the level of competition at this year’s event.

Those who witnessed Tuesday’s action understood what level he was referring to.

The marquee match between Madison Keys and Grace Min lived up to expectations.

Keys, who was the top seed in the qualifying round, led 4-2 early in the first set.

The 16-year-old Keys put her opponent on the defensive but had several unforced errors giving Min all the momentum to take the set.

“It wasn’t my strategy,” said Min.

“I was just hitting too many balls into her strike zone and she’s the type of player who is very aggressive and can hurt you because she has a lot of weapons. My main adjustment that got me the match was to keep her moving and not let her get a good look at the ball.”

The roles reversed in the second set as Min jumped out to a 5-2 advantage before seeing Keys come surging back to tie the set 6-6.

In the tie break, Min once again played mistake free tennis to defeat Keys 7-4 to advance.

Min, won the 2011 US Open girls’ singles title and is ranked as the fourth junior player in the world.

Earlier this year, Keys became the youngest player since 2005 to win a US Open main-draw match.

Min and Keys are very familiar with one another’s playing style. The pair trained together at the USTA training center in Boca Raton, FL.

With the win, Min earned a qualifying spot in the singles main-draw and will take on the fourth seeded Camila Giorgi.

Giorgi is ranked 144 in the WTA Singles Rankings.

Ben Maxwell contributed to this report.