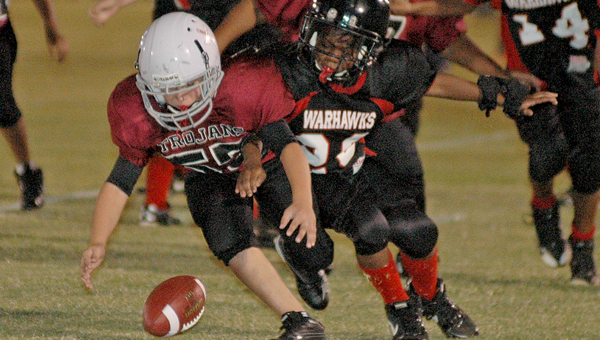 It was an exciting night of football at the Troy Sportsplex as both Troy’s varsity and junior varsity youth recreation teams were in action against Daleville Monday night.

The cold weather didn’t spoil the action on the field as both teams gave the hometown fans something to cheer about.

Troy jumped out front early as Malcom Hall took the reverse handoff and raced 40 yards for the score giving Troy a 6-0 lead.

Later in the quarter, quarterback Brock Huner hooked up with Corey Rotten for a 15-yard pass completion setting up a 2-yard Jayvious Horton touchdown run to extend Troy’s lead to 12-0.

While the scoreboard remained quiet, the teams did trade big plays.

Huner would find Justin Harrell in the second quarter for a gain 36 but the drive would end on a fumble.

Daleville’s final attack in the fourth quarter was ended when Aaron Kelly intercepted a pass to seal the game for Troy.

The varsity team was not as fortunate on the scoreboard but did provide a nailbiter of a game.

Daleville scored in the first quarter on a 2-yard play action pass from Riley Rimple to Austin Beal.

In the third quarter Troy would even things up.

Jabronski Williams broke free around Troy’s right end and raced all the way to the 1-yard line before being tripped up.

That big play set up Jordan Dixon’s touchdown pass to Jalen Psalmonds to knot the game at 6-6.

The fourth quarter was more of a defensive struggles as neither team made a serious scoring threat.

Overtime rules in youth football place the ball at the 10-yard line and give each team four untimed downs to score.

Troy failed in their try as their fourth down pass attempt was intercepted.

Daleville took their turn and after a couple of Troy penalties saw Rimple carry the game winner across the goal line to give Daleville the 12-6 victory.

Troy will take on Brundidge at the Troy Sportsplex on Oct. 17.

The junior varsity team will lead things off at 6 p.m.