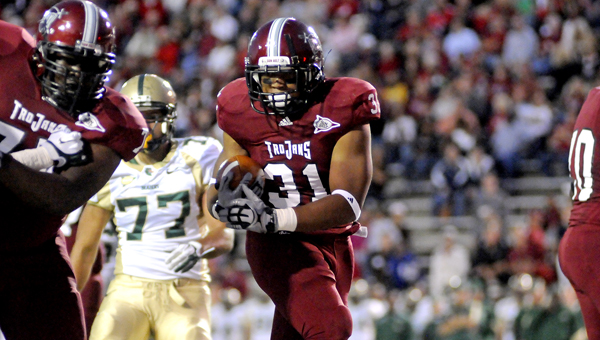 Troy running back D.J. Taylor (31) runs the for a touchdown during the first quarter of an NCAA football game against UAB in Troy, Ala., Saturday, Oct. 1, 2011. (Messenger Staff Photo/Thomas Graning)

D.J. Taylor has traveled a long road as a Troy Trojan. The former walk-on running back began as an unknown on the Trojan squad; however after his clutch performance in Saturday’s match-up against rival UAB, fans now know his name.

In his career, Taylor a junior Bay Minette native, has not only battled through the tough walk-on route but also through a medical redshirt after suffering a back injury in his first season in 2008. Ever since then Taylor has moved his way up the depth chart now splitting the running back duties with Chris Anderson and Shawn Southward.

Even taking direct snaps out of the wild cat formation Taylor was not the leading rusher for Troy against the Blazers, as he trailed Anderson’s 69 yard rushing performance with only 53 yards rushing. However, Taylor confirmed significance to Troy’s running game accounting for all three of Troy’s touchdowns including the all important two yard game winning touchdown run in the final four minutes to give Troy the inevitable 24-23 revenge victory over UAB.

“Coach ‘E’ had faith in me to get it in the end zone and I didn’t let him down,” said Taylor. “When you have that opportunity you’ve got to take advantage of it, and I think I did that.”

Taylor has not been the Trojans leading rusher or even their leading scorer all season but has proven himself a true asset to the Trojans running game with his ability to power running ability.

So far this season Taylor has totaled 168 yards rushing with his highest against Clemson in week one with five rushes for 63 yards. Taylor’s first quarter three yard touchdown run against the Blazer’s was his first of the season; which he quickly followed up with two more.

Taylor has proven himself important to the team’s ranks in the intangible category. In his past three years he has proven to his coaches and teammates his determination and endurance.

“You’re going to see him catching the ball out in the flats, catching the ball down field, lining up in an empty backfield as a slot receiver and just different things,” running backs coach Jeff Beckles said earlier this season. “With the work ethic he has, he deserves it,”

Taylor has earned his way up the depth chart as not only an important rusher for Troy but also an important leader on the sideline.

“I told the team to keep their head up and to keep on pushing forward,” Taylor said when his team was trailing to the Blazers. “We had some people on the sidelines holding their head and I told them to stay positive.”

Taylor’s hard work is now starting to pay off on the score board but that is not what is important to him.

“My three touchdowns don’t matter,” said Taylor. “As long as we win the game I’m happy, and we did that.”

Despite not being the most explosive rusher in Troy’s offense, Taylor has proven himself invaluable not only to Troy’s running game but also to Troy’s team.