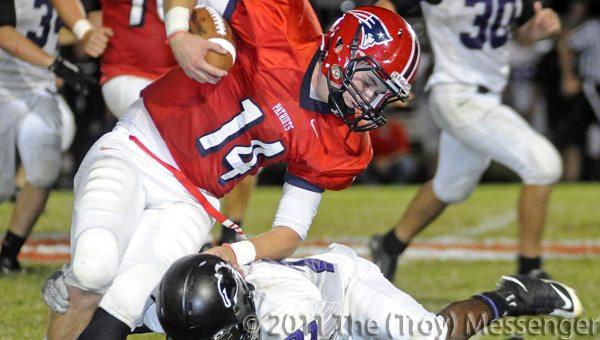 Prattville Christian gave Pike Liberal Arts a fight but the Patriots kept the ball churning on the ground to come away victorious, 23-6.

Nick McLaughlin, who has rushed for over 1,000 yards already this season, picked up another 168 on 34 carries.

After holding the Panthers on a fourth and four in the second quarter, Pike took over at their own 23-yard line. A 14-play drive would end on a Josh Starling 1-yard plunge to give the Patriots a 10-0 advantage.

On PCA’s ensuing drive, quarterback Edward Todd took the snap and rushed around the left end then cut back to the Patriots sideline and raced 75 yards for the score pulling the Panthers within four, 10-6.

“Besides the big play, I thought our defense played well,” head coach Steven Kilrease said. “We knew they had athletes, we had to find a way to contain them.”

Pike would run out the rest of the first half clock and take that lead to the locker room.

PCA took the second half kickoff but on their second play fumbled the ball over to Pike at their own 36.

“I thought we defended the option very well,” said Kilcrease. “That’s where they can hurt you and we did a good job against it.”

The Patriots would fail to capitalize, however. After a penalty and a loss of 10 on a broken play, Pike turned the ball over on downs.

The Panthers would punt after a three-and-out again setting Pike up in prime scoring position at the Patriot 47.

Running back Nick McLaughlin gained 18 yards on the drive’s first play. Starling later completed a pass in the left flats for a credit of eight. Starling then hooked up with Lawson Stewart for a 21-yard scoring strike to extend the Patriots lead, 17-6.

“It was supposed to be a shorter route,” said Starling. “But Lawson did a good job of making the adjustment.”

“We battled through and got the win,” Kilcrease said. “They (Prattville Christian) came to play and did a good job.”

Pike would add to their lead late in the game when McLaughlin scored on a 2-yard run to cap the scoring.

“We have some work to do,” McLaughlin said. “We won but we didn’t play very well.”

The Patriots will next travel to Greenville to take on the Fort Dale Academy Eagles.

The matchup could be make-or-break for Pike as they sit just 1-2, currently, in region play.

The last time the Patriots missed the playoffs was 2006.

Pike also has remaining region contests with Lee-Scott and Glenwood.