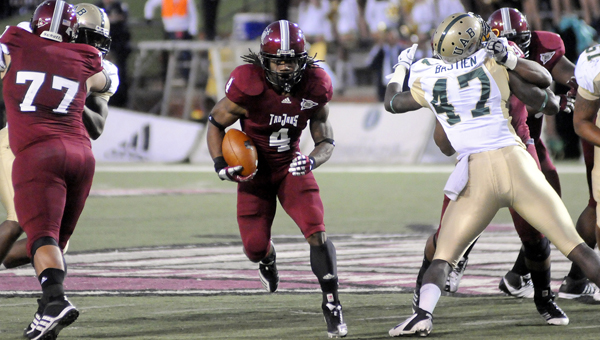 Jimmie Anderson intercepted a UAB pass and D.J. Taylor scored his third touchdown of the game on a 2-yard run with 4:07 remaining in the game to lift Troy to a 24-23 victory Saturday night.

Taylor rushed for 53 yards on 12 carries and scored on run from 3, 1, and 2 yards out as the Trojans exacted their revenge on a Blazer team that beat them 34-33 last season.

“I’m excited for the victory,” Taylor said. “We started out rough but we fought through adversity and ended up winning the game.”

Troy trailed 23-17 with 5:18 on the clock in the fourth quarter when Anderson read a developing Blazer screen pass and jumped in front to pick off his first pass of the season.

“I saw the receiver go under and the lineman started to pull,” said Anderson. “I was just watching the QB. Luckily he threw it and I was right there to make the play.”

In an eerily similar situation as last season, a Will Goggans punt pinned UAB at the 1-yard line to hand the ball over for the last series of the game. With only 17 seconds remaining the Blazers ran out of time before mounting another miracle drive.

Troy players may have put last year’s questionable call out of their minds but that thought had to come tearing back through their memory early in Saturday’s rematch.

After UAB return a Troy punt 91 yards to the Troy 1-yard line, UAB quarterback Jonathan Perry appeared to score. Officials ruled Perry was stopped short when replays clearly showed the ball more than a yard deep in the endzone.

The Blazers would score on their very next play however; on another Perry rush to give the Blazers an early 7-0 lead.

“We had some problems,” head coach Larry Blakeney said. “We’re still missing tackles but I think we warmed up to tackling later in the game.”

Troy’s Corey Robinson, who connected with 12 different receivers in last week’s 38-35 win over Middle Tennessee, continued to spread the ball around. Robinson would find 15 different teammates on the night to finish 30-for-49 for 349 yards.

Incidentally, the quarterback failed to toss a touchdown pass in a game for the first time in his Trojan career.

“UAB played a very good football game,” Robinson said after the game. “Me personally, I’ve got to get a lot better.”

Troy would knot the score on their ensuing drive. Robinson completed a pass to tight end Jim Teknipp, the first reception of his career, for a gain of 21 yards. Hollis Moore would haul in a Robinson pass for 16 more. Three plays later, Taylor picked up his first score of the night.

UAB’s Ty Long would kick a 37-yard field goal early in the second quarter to put the Blazer back in front, 10-7.

Troy would drive down to the UAB 30 before a fourth down pass attempt fell incomplete. The Blazers then ran four plays before punting it back to the Trojans. The UAB punt was downed at the 4-yard line.

Troy then marched 96 yards on 11 plays capped by Taylor’s 1-yard plunge to give the Trojans a 14-10 advantage. The drive was the longest for Troy since a 98-yarder against Southern Utah in 2002.

UAB would tack on a field goal just before the half to make it 14-13.

The teams would trade punts coming out of the break. On Troy’s second drive, Michael Taylor missed a 43-yard field goal.

UAB would move down to the Troy 23 where Long booted a 41-yard field goal to give the Blazers a 16-14 lead.

Things began to look bleak for the Trojans as Robinson was intercepted by T.J. Ballou, whose 52-yard return extended UAB’s lead to 23-14.

The teams would again trade punts, Troy would lose a fumble and UAB would miss a field goal before the comeback began.

The Trojans took possession at their own 25 with 7:12 in the final frame. Robinson connected with Stanley Arukwe for 24 yards on the fifth play of the drive then the QB scrambled for 10 more. Three incompletions and a false start later, Michael Taylor kicked a 48-yard field goal to bring Troy within six, 23-17.

On UAB’s second play on the ensuing drive, Anderson picked off Blazer quarterback Jonathan Perry to give the Trojans the ball at the UAB 12. Taylor’s third score gave Troy the 24-23 lead.

“Coach Edenfield had faith in me to get it in the endzone and I didn’t let him down,” said Taylor. “When you have that opportunity you’ve got to take advantage of it.”

Troy outgained UAB 521-356 but couldn’t turn the yardage into points.

“I still don’t think we’re as good as we’ve been especially offensively,” Blakeney said. “I just felt like we were a little greedy at times and impatient at times.”

Ladarrius Madden and Brynden Trawick led the Trojans defensively with nine tackles each.

Troy will hit the road next week to face Louisiana-Lafayette. Game time is set for 6 p.m.