Bring on the Blazers 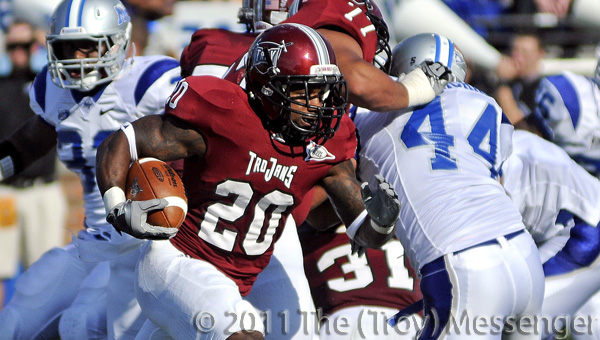 Last year’s loss to UAB has been weighing on the hearts and minds of Troy fans all year. The outcome of the game has fueled a fire that has already been a blaze in this rivalry matchup. Especially that of a controversial call on the final play of the game that would give the Blazer’s the 34-33 victory over Troy.

“It definitely left a sour taste in our mouth,” said offensive lineman Kyle Wilborn. “This is a big rivalry game to us and hopefully we will change the outcome from last year.”

Despite last year’s heartbreak Troy is not letting that disappointment go to their heads as they prepare to host the Blazers on their home turf this Saturday.

“We are approaching this as a new year, a whole new team for us and for them,” said quarterback Corey Robinson. “We don’t have anything to say about that game last year. We felt like we should have won and we were better in all aspects of the game. We are working hard this week to get better and get ready for UAB.”

Robinson enters the matchup against UAB just 295 yards short of recording 5,000 career passing yards. So far this season he has averaged 326 passing yards a game, including a 348 passing yard performance at last week’s home victory against Middle Tennessee.

The Trojans and Blazers are all tied up at 4-4 in their all time meeting; however Troy is 2-1 at home against UAB. Despite entering the matchup with the drive of a chip on their shoulder and the momentum coming off a home victory over their conference rival, a win Saturday will not be an easy task for the Trojans. UAB enters Saturday looking for their first win of the season having already lost two games on the road against Florida 39-0 and East Carolina 28-23. The Blazer’s are fired up as well and will be looking to start their season in the win column against Troy.

However when it comes to in-state rivalry’s, especially in the state of Alabama, the past and records mean little during the game.

“I’ve talked to our guys and we are not going to be into talking about the end of the game or the last play of the game,” said head coach Larry Blakeney. “The outcome was that they beat us. That is what we are going to try to use as motivation for preparation. I’ll never take anything away from that group of players and coaches that got the ball on their own one-yard line and drove it to the middle of the field and had a chance to throw it up. It’s another year. Hopefully we can change the outcome. I know it’s important to our folks, our administration, important to especially folks that live anywhere around here. Any time you play an instate game it’s important. We have taken pride in playing folks inside the state of Alabama. It is vitally important to put your best foot forward when you are playing somebody that you are going to recruit against.”

Even with many positive aspects to build on Troy’s main focus will continue to be dominating all four quarters. Even in last week’s win over MTSU the Trojans spent nearly a full three quarters down to the Blue Raiders before finally taking the lead. This is an issue Troy has been addressing all season and will continue into this weekend’s matchup as well.

“That second half deal produced a win,” said Blakeney. “I’m like a lot of folks, I would like to score a hundred and win by 30 and not ever have any stress, but there’s going to be stress in this game.”

The Trojans will kick off against the Blazers today at 6 p.m.