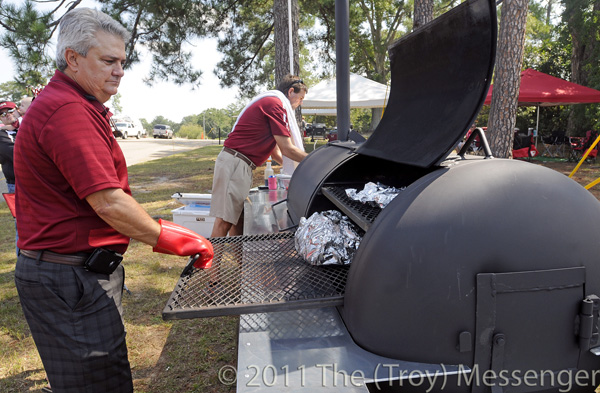 David Phelps cooks on his grill while tailgating before an NCAA football game between Troy and Middle Tennessee State in Troy, Ala., Saturday, Sept. 24, 2011. (Messenger Staff Photo/Thomas Graning)

While thousands of Trojan fans gathered to soak up some sun, fire up the grill, and cheer on their team in Saturday’s home opener, other Troy University die-hards were setting the bar of tailgating greatness a little higher.

Scattered across the campus several showed off their new tailgating toys for the first time this season. Many would agree there a few essentials necessary for a good tailgate, friends, food, music, and football.

The Trojans took care of the football on the field with a 38-35 victory over rival Middle Tennessee State but who handled the rest?

Can you top having 300 fellow Trojans in one place? The Sound of the South marching band gathered in Troy’s dining hall for a pregame meal in the new facility and were surrounded in a world of Trojan spirit.

“It’s like sensory overload,” said senior band member Josh Wire as he sat under a large mural of assorted Troy University academic and athletic renderings. “There is so much going on but I think it’s great.”

Sound of the South member Anthony Harris may have expected Conrad Hilton to walk in at any moment.

Luxury aside, good music is required for the true tailgater to be fully able to get their groove on. 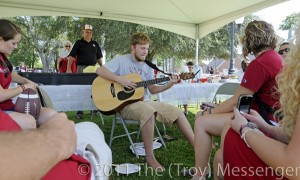 On Tailgate Terrence, Colton Smith was providing just that. No heavy bass or computer generated beats here, just a guitar and a crowd covered in cardinal and white enjoying the riffs.

One popular tailgating game seen throughout the campus is cornhole.

While the game itself has been around for centuries the popularity at sporting events is relatively new.

Cornhole is played with four cornhole bags (bean bags) being tossed at a raised platform with a hole cut in the far end.

The platforms are normally made of plywood, while any sturdy material can be used.

Troy graduate Brad Davis and friends played a round at the Home Oil tailgate tent near Sartain Hall.

“It’s a way to pass the time and hang out with friends,” Davis said. “We love hanging out before the game so it’s just another fun element.”

The tailgate champion Saturday, however, would have to be the group led by Dake Davis , Julius Pittman, Eric Mizell, and David Phelps.

The Trojan tailgate bus has brought much publicity to the group but a new feature was introduced Saturday afternoon.

The grill could be viewed as a full service kitchen on wheels.

“The idea was to have everything you need,” Phelps said. “When you hook it up to go, you already have all your tools and utensils.”

The mobile grill was purchased already attached to the trailer. Phelps spent more than 100 hours tricking out his cooker.

The shell around the grill itself is made from aluminum sheets riveted together to form a casing as well as a counter top.

It also features a cook top on the front perfect for sautéing and boiling.

In the rear is a compartment great for strapping down a cooler of storage container.

And what would a barbecue be without a radio? Well, the ultimate grill has that as that too.

Phelps rigged a marine stereo with a speaker on all four corners of the outer casing. The plan is to also add taillights.

To top it off there is an eight-foot PVC pipe with a Troy flag flying from the front of the trailer.

“I hope to bring it every game,” Phelps said.

Aside from the football games, Phelps said his wife would use it for charitable purposes.

“I want to get it to where when something happens like the tornados in north Alabama, she can hook up and go,” he said. “It would be great to help out and help provide a meal in times like those.”

With all the happenings at the university Saturday, none could top the fantastic showing during the new and improved Trojan walk.

The walk which started at Sartain Hall was a time of pride for both players and coaches alike.

“I got a little emotional during Trojan walk,” head coach Larry Blakeney said. “It was a mob scene that carried us right into Tailgate Terrance.” 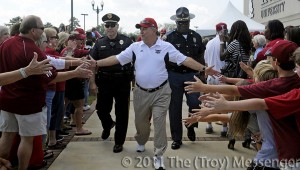 Members of the student body including the fraternities and sororities made up the beginning portion of the walk. The team then made their way through the Sound of the South marching band lined along University Avenue then fans and family members formed the remainder of the wall all the way into Veterans Memorial Stadium.

The pregame festivities ended with the pre-coin toss ceremony for Blakeney in naming the field in his honor.

“I was proud of that with all my family there,” he said. “I was more proud that anything that we were able to win on it.”