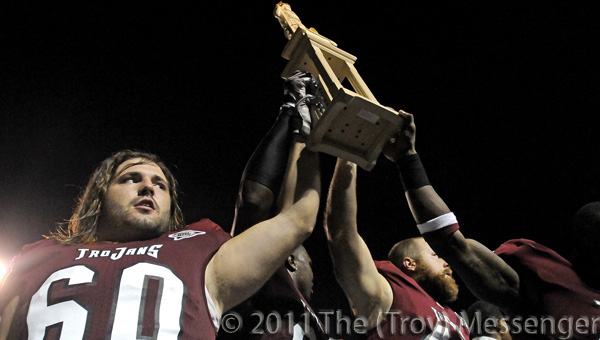 Corey Robinson passed for 348 yards and three touchdowns as the Troy Trojans picked up their first victory of the season, 38-35, over rival Middle Tennessee State University.

The game proved to be just as exciting as one would expect between these adversaries. The teams combined for 1,061 total offense yards, 762 coming through the air.

After allowing early scoring drives in their first two contests to Clemson and Arkansas, the Trojans elected to defer after winning the coin toss, giving their defense the task of setting the tone.

Set the tone they did, though not for long.

Kanorris Davis made a jarring tackle on the opening kickoff before the defense forced a quick three and out giving the offense a chance to capitalize.

Brett Moncrief, seeing his first action back from a broken ankle during spring practice, collected his first reception of the season to pick up the Trojans second first down of their opening drive. Robinson missed a wide open Corey Johnson on a post route on second down and Robinson was subsequently sacked forcing Troy to punt. 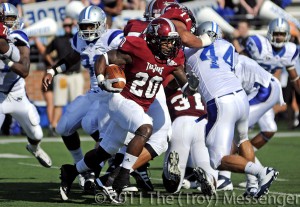 With under six minutes remaining in the first quarter, MTSU quarterback Logan Kilgore connected with Reggie Whatley on a screen for an 82-yard scoring strike to give the Raiders a 7-0 lead. The play was the Raiders fifth longest play in the team’s history. The score also gave Middle Tennessee their first lead against Troy since 2006.

The bad only got worse for Troy in the first quarter as Robinson was intercepted by T.L. Edwards to give MTSU the ball at the Troy 18-yard line.

The reason for the coach’s confidence in the defensive unit showed as the Raiders were stopped on fourth and short on the 9-yard line to hand the ball back to the Trojans.

With 14:04 in the second quarter, defensive end John Robles dislodged the ball from the hands of Kilgore and Chris Pickett scooped it up with nothing but the endzone to slow him down. 62 yards and an extra point later, the Trojans had tied the score, 7-7.

“I just stripped the ball and saw him (Pickett) pick it up,” Robles said. “I wasn’t going to do anything stupid like a block in the back so I just stood there and watched him run it in.”

The fumble return for the touchdown was the Trojans first since the 2009 New Orleans Bowl.

Troy (1-2, 1-0) seemed to have momentum on their side after they forced a MTSU punt and regained possession at their own 7. On third and 10, Robinson hooked up with Eric Thomas for a 41-yard gain. One play later, Chris Anderson fumbled ending the threat.

The Raiders (0-3, 0-1) didn’t waste any time taking advantage of the turnover. On the third play of the drive, Kilgore found Sancho McDonald for a 50-yard score. MTSU led 14-7. 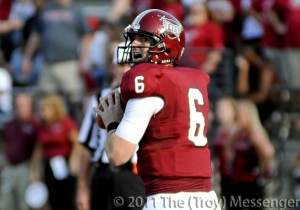 Troy’s offense showed a little life on the ensuing drive. After receiving the ball with 8:19 in the half, the Trojans reeled off a 10-play, 68-yard drive capped by an 8-yard touchdown pass from Robinson to Jaquan Robinson.

The Raiders followed with an impressive drive of their own, scoring on a 37-yard pass from Kilgore to Benny Cunningham with just 55 seconds remaining in the half.

Kilgore would set a new personal best, passing for 415 yards against the Trojans. His previous top mark was 330.

Troy claimed possession to begin the second half and quickly tied the game. Two plays into the third quarter Robinson connected with Thomas, who got behind the Raider secondary, for a 46-yard touchdown.

Kilgore continued to terrorized the Trojan defense as his led a 11-play, 82-yard drive and found Malcom Beyah streaking down the Raider sideline on fourth and four to reclaim the lead, 28-21.

“They came in well prepared from their week off,” Robinson said. “They were a very good football team tonight.”

“Mikey has been in a bit of a slump,” head coach Larry Blakeney said. “I told him tonight (after the game) he was officially out of his slump.”

The Trojans had a scare later in the third when Robinson was hit on a pass attempt and came up favoring his shoulder. This opened the door for former starter Jamie Hampton to step back into the huddle.

Hampton, who played a snap on the opening series, saw his first action since the Middle Tennessee game last season.

Hampton completed one of his two pass attempts.

“I told coach it means a lot just to get one snap and hand the ball off,” he said. “Just to go in and play meant a lot.”

After MTSU missed a 37-yard FG attempt, Robinson returned to the field. On his first play back, he hit true freshman Chandler Worthy for a 75-yard scoring pass with 1:11 left in third quarter to give Troy a 31-28 lead. The score was Worthy’s first of his young career.

Robinson would finish 24-for-38 for 348 yards and the three scoring tosses.

“It feels great running down the field looking at the fans screaming and watching yourself on the jumbotron,” he said.

Troy would force a Raider punt and drive down to the 8-yard line where Anderson would redeem his fumble by taking a handoff and diving over the right corner pylon.

The Trojan offense rolled up 303 second half yards in the victory.

Aside from the score on their first drive of the second half, Middle Tennessee was held silent offensively until Kilgore connected with Anthony Amos for a 34-yard score and Kilgore’s fifth touchdown pass of the game with only 3:18 left on the clock.

Troy was forced to punt with 2:53 remaining and saw the Raiders drive down to their 35.

On fourth and four, Brynden Trawick stepped in front of Kilgore’s final attempt, batting it into the air and into the hands of junior Brannon Bryan securing the Trojan victory.

“This team has struggled with two top 20 teams,” Blakeney said of his team after the game. “It’s a great win, it’s a great conference win.”

Under the radar a bit was Shawn Southward, who rushed for 96 yards on 13 carries.

Thomas finished as the Trojans leading receiver with four catches for 108 yards and the touchdown.

The Trojans will prepare to take on their in-state rival, UAB, on Oct. 1. 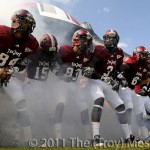 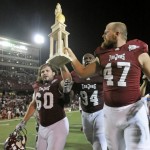 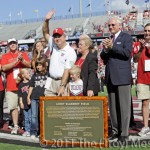 Troy head coach Larry Blakeney waves the crowd after a ceremony dedicating the field to him before an NCAA football game in Troy, Ala., Saturday, Sept. 23, 2011. (Messenger Staff Photo/Thomas Graning)