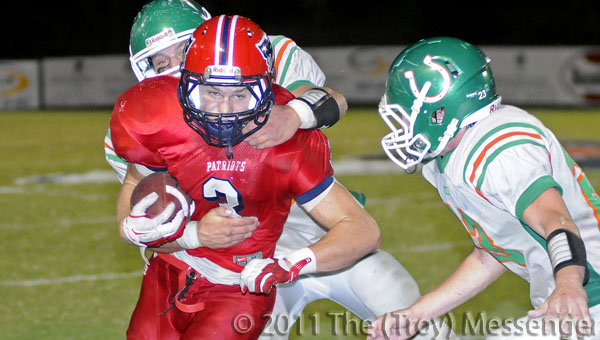 Pike Liberal Arts crowned a new homecoming queen last night, but they also showed that they are back on the rise to being kings of the AISA world as they steamrolled a potent Hooper team 45-20.

The Colts, having scored 30+ points in three of their five games, came into Pike County looking for a shootout with the Patriots.

Pike Liberal was up for the challenge, playing phenomenally in the first half as they scored touchdowns on all six of their first half drives

“I thought we came out in the first half and played really good,” head coach Stephen Kilcrease said.

“We got a lot better this week, and we have to come back next week and continue to get better.”

Pike opened up the flood gates early when Senior Nick McLaughlin had a 53 yard touchdown run, cutting through the helpless Hooper defense to make it 7-0.

McLaughlin had an unparalleled night on the ground, as he rushed for 300 yards on 27 carries (298 of them came in the first half on 21 carries) with 5 touchdowns.

Hooper was quick to give the Patriots the ball back on their next possession when they fumbled on their first play after the Pike touchdown.

The Patriots marched down the field and finished off on Hoopers mishap with a 7 yard McLaughlin score to make it 14-0.

Hooper answered right back on a big play of their own, as J.T. McCray threw a bullet to Drew Owen in traffic. Owen was able to shake off the tackle and blew by a Pike defense that seemed to fall asleep for a second for a 55-yard pass to make it 14-7.

Pike had no problem responding with a big play of their own, as McLaughlin dashed down the sideline for a 72-yard run to give the Patriots their two score cushion back.

It seemed like an offensive slugfest was about to break out between these two teams the next drive, as Hooper’s McCray threw another big touchdown pass, this one was a 54-yarder and to Darius Bennett to make it 21-13 after the extra point was missed.

“We just got to tackle (to prevent those big plays)”Kilcrease said.

“We had guys on them, they just missed the tackle. We missed a lot of tackles last week. We got better tonight and we have to improve there.”

But despite giving up those big plays, Pike Liberal was still able to hold Hooper’s high powered Colt barrage to a mere 20 points and 204 offensive yards.

“With the exception of two plays, I thought we were good intensity wise. I thought we stopped the run pretty good. We just had those two breakdowns in the secondary but we’re going to get better.”

The Patriot offense was still in full force though and continued to assert their dominance over the Colts when McLaughlin punched in a 5-yard run for another touchdown, which was set up by two big Lawson Stewart catches.

Stewart looked to be back in full force after recovering from injury, with three catches for 87 yards.

“He got hurt the second week of the season, and he is a weapon both offensively and defensively for us.” Coach Kilcrease said.

“He had a big night for us, and he will continue to make those plays for us.”

Half way into the second quarter, Pike Liberal would extend their lead even more as Josh Starling was able to squeeze in on a quarterback sneak after the Patriots were set up by a 46-yard McLaughlin run.

Hooper continued to struggle on offense awarding the patriots yet another scoring opportunity. McLaughlin would scamper his way into the end zone on a 30-yard run to make it 42-13.

The Patriots would only score only one time in the second half, as the Patriots scored on a 28-yard field goal early in the 4th quarter.

Hooper would get one last consolation touchdown at the end as Drew Owen threw a short 3-yard touchdown pass to Tatum Cobb in the dying minutes of the game to make it 45-20.

Next week the Patriots take on Prattville Christian Academy, who coach Kilcrease regards as a good team despite their record.

“(They have) a lot of good athletes. They’ve got a good football team,” coach Kilcrease said.