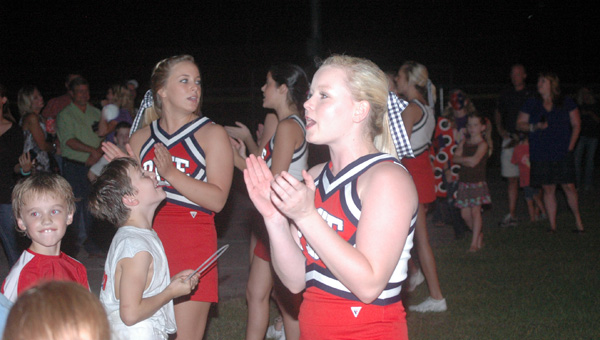 The week started with Pike Rules Day on Monday. The school dressed as Kings and Queens and held a contest for the class with the most participation.

Tuesday was Kick the Colts Day that featured a Kung Fu theme. The fun continued Wednesday as Hook Hooper saw the student body get into their pirate gear.

Thursday served as School Spirit Day where the students wore their homecoming t-shirts. Today is Dress Up Day and will show off who is best dressed.

The Troy Fire Department led in the team to Thursday’s pep rally with the cheerleaders riding in on Engine 3.

After several cheers, the squad lit the bonfire to the delight of the many young Patriots in attendance. Their enjoyment would only escalate as the eight-member team led the fan-base inside the gymnasium.

Once inside, the lights were killed and the onlookers were treated to an adventure around the world in search of the best football team.

With black lights illuminating only the cheerleader’s white costumes and the theme-oriented backdrop, the squad began their search in Hawaii where they, with the help of some brave Koa warriors (football players) showed off the intricacies of the hula dance.

After failing to find the best team in Hawaii, the squad landed in Asia where they studied the Ninjas and learned the legendary abilities of invisibility, walking on water and even control over natural elements.

Africa was the next stop on their wild adventure. The squad survived the mighty jungle with “no worries” but still could not find the best team.

After quick stops in Brazil to celebrate the Carnival and Tortuga to battle with the pirates of the Caribbean, the girls returned to Troy to find the best team was on the campus of Pike Liberal Arts.

“I am so proud of these girls,” cheer sponsor Mindy Avant said. “To say they worked hard is an understatement.”

Captain Amy Fleming echoed her coach’s remarks and said she especially enjoyed the pep rally saying “it’s the most fun event of the year.”

Captain Lanaye Kohn said that while the entire production was enjoyable the large, electric crowd made them feel as if the really were in some of the exotic places.

“My favorite part was the beginning when it wasn’t so hot,” she said laughingly.

The exhausted squad finished to a loud applause from the crowd but none louder that the one from their coach.

“This is one of the best groups I could have asked for,” a truly proud Avant said afterwards. “I had fun and I think they did too.”