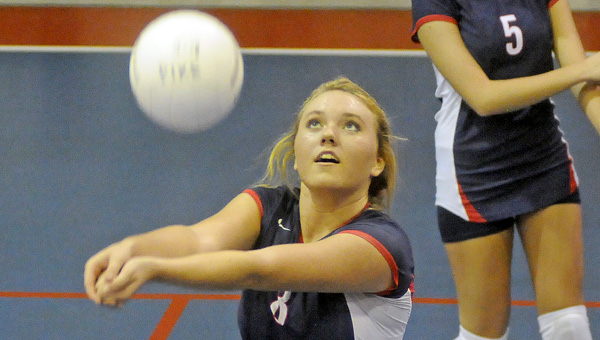 Pike Liberal Arts picked up a milestone victory in their program’s history Monday.

The Patriots knocked off two-time defending state champion Morgan Academy for the first time in the school’s history, 3-1.

The Senators defeated Pike in a thrilling five-set match earlier this season but the loss may have helped the Patriots as the team has gelled since the heartbreaker in Selma.

“I think that was a turning point in our season,” sophomore Marlee Tunstill said. “We have come together as a team.”

Before the match on Sept. 12, the Patriots were teetering at the .500 mark and playing roller-coaster-like volleyball. Since then, Pike is 4-0 and looking stronger than ever.

The loss seemed to resonate with the youthful team that is filled with members of the state runner-up team from a year ago.

“We had won at the junior varsity level last year but we were getting pounded on varsity,” Carrley Barron said. “After the Morgan game, we knew we wanted to beat them and play for a state championship.”

Pike showed that intensity Monday as they played another scrappy match with the current 3A trophy holders.

The first set made the game an instant classic as the two teams went point for point until the Patriots landed the game-winner, coming out ahead 30-28.

The Patriots fell in the second to the hand of self-inflicted wounds.

The third, however, was the momentum shifter. After falling behind 19-23, Josie Free set up to serve. Point after point began to fall as Pike’s front line rotation of Jaylan Reynolds, Carrley Barron and Tunstill proved too much for the Senators. The Patriots won the set 25-23.

The fourth set was dominated by Pike’s solid defense and timely attacks. Free also continued to produce quality serves and setting up teammates at the net finishing with 23 assists and seven aces.

“We know she’s going to give us quality serves so we play with more confidence,” said Barron.

Reynolds, who has proved to be an all around contributor for the Patriots, registered a double-double with 12 digs and 13 kills. She also tossed in seven blocks.

Tunstill turned in another solid performance with 14 digs and 13 kills.

“They are improving everyday,” said head coach Mindy Avant. “We have some youth but they want to win.”

The Patriots begin a stretch of three consecutive home matches with region opponents like Lee-Scott, Hooper, and Macon-East. Lee-Scott knocked off the Patriots in their previous meeting.