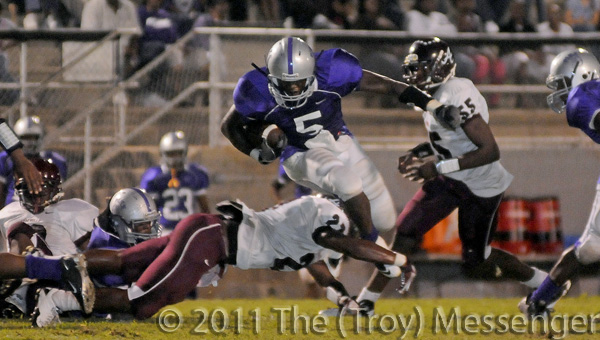 BRUNDIDGE – The Abbeville High School Yellow Jackets used a balanced offense and an opportunistic defense to come away with a surprisingly easy 35-7 win over the Pike County High School Bulldogs in an important Class 3a, Region 2 contest in Brundidge Friday night.

With the win, the Yellow Jackets (3-1, 3-0) defeated the Bulldogs for the first time on the gridiron in several years.

Meanwhile, it was long night for the Pike County fans who watched their Bulldogs who lost their eighth straight game.

An unexpected 1 hour and 45 minute delay due to officials’ car problems made the night even longer for the Bulldogs (0-4, 0-3).

The Yellow Jackets took control on the first play of the game when junior quarterback Marquavious King hit Jaylin Porter on a 58-yard scoring pass. The successful extra point gave the Yellow Jackets a 7-0 lead just 27 seconds into the contest.

After holding Pike County to three and out, Abbeville scored its second touchdown on a five yard run by Damion Chitty to extend the lead to 14-0 with 5:49 left.

Following an exchange of punts, King broke several tacklers and 55 yards for a touchdown to help Abbeville earn a commanding 21-0 lead late in the first quarter.

Pike County scored its only touchdown in the game when Damion Adams scored a one-yard run.The key play in the drive was a 13-yard run by Marlon Meadows. Quadry Greasham’s successful extra point cut the deficit to 21-7 with 5:26 left in the first half.

Abbeville though took the momentum away late in the first half when King connected on another touchdown pass to give the Yellow Jackets a 27-7 lead at the half.

Early in the third quarter, Pike County drove the ball twice into the red zone but was turned away without points both times.

Abbeville scored its final touchdown on a 20-yard run by king.

The lone bright spot defensively was Corey Scott picking off two passes for the Bulldogs.

Pike County returns to action this Friday night at Goshen. Kickoff from Eagle Stadium is set for 7 p.m.