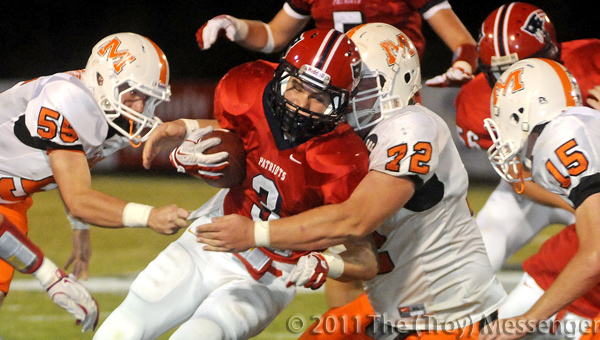 You could feel the electricity in the air as two AISA powerhouses locked horns in a pivotal matchup that would surely determine the region rankings.

The game was shaping up to be a slobber knocker fight between Pike Liberal Arts and Monroe Academy, until the Volunteers turned up the heat in the second half and left the Patriots in the dust, defeating Pike Liberal 32-14 and showing everyone in Pike County why they are the AISA’s top ranked team.

The loss gave the Patriots their second straight loss this season.

“We played a great first half” Head Coach Steven Kilcrease said. “Our guys played hard, but things just got out of control at the end there. We just have to regroup and keep getting better.”

Both teams were stuck in a defensive chess match that had them exchanging punts throughout the first quarter.

Pike Liberal tacked on the first score of the game half way through the second quarter as Nick McLaughlin punched the pigskin into the end zone on a 2-yard run to give the Patriots the early 7-0 advantage.

McLaughlin, who ran for 79 yards and both of Pike’s touchdowns, along with 62 receiving yards, proved to be the only consistent offensive spark throughout the game.

Nearing the end of the first half, the Volunteers were putting together a productive offensive drive and looked like they were flirting with tying the score up, until a big sack by Alex Pierce pushed Monroe back ten yards and out of creating a scoring opportunity.

The sack proved to be crucial as Monroe was forced to try for a field goal, that they would ultimately miss.

The second half came, and it seem liked a completely different ball game, as Monroe would outscore Pike 32-7 in the second half.

“We made the plays in the first half, and they came out and made them in the second half,” Kilcrease said.

One key play that might have had a say-so in the changing of the guard was a gutsy fourth-and-1 call that the patriots went for and failed on deep in their own territory.

“It changed the momentum of the game,” Kilcrease said. “We had momentum, we were moving the football and I’d probably do it again. Maybe with a different play.”

The game spun 180 degrees at that point and it was all Monroe.

The Volunteers capitalized on Pike’s failed 4th down attempt after running it in from 2 yards out to even it at 7-7.

After a quick three and out for the Patriots, Monroe wasted no time as they delivered a quick 35-yard throw that would give the Volunteers their first lead at 14-7.

A Josh Starling interception would set up the Vols for yet another scoring drive. This time it was a 42-yard field goal to make it 17-7.

Starling would make up for his error by hitting McLaughlin for a 50-yard pass that set up McLaughlin to run the ball in from 12 yards out, giving the Patriots some life at 17-14.

Monroe just proved to be too much to handle though.

The Vols. tacked on another field goal from 34 yards after Pike allowed a long kickoff return that made it 20-14.

Pike Liberal fumbled the ball on their next drive in a costly part of the field and the Vols would capitalize on a 2-yard run that made it 26-14 after the failed two-point conversion.

Another Pike interception allowed for the Vols to capitalize on a long 65 yard touchdown run, which put Monroe in cruise control at 32-14 after the missed extra point.

“I hope our guys see that we can beat anybody,” Kilcrease said.

“This is a good football team that we played, but we’re right there with them. We just have to keep getting better. It’s still a long season.”