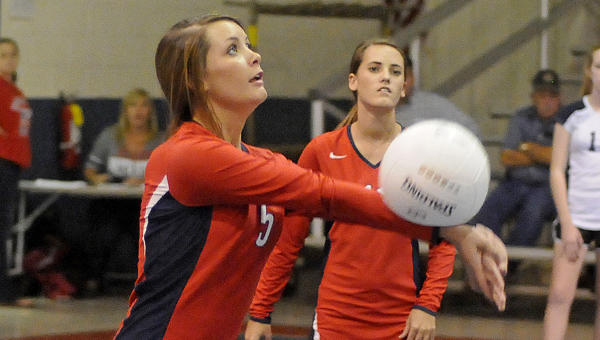 Head coach Mindy Avant feels that the team is getting stronger despite their youth.

“Our coverage has gotten a lot better since the start of the season,” she said. “We still need to set the ball up more.”

Pike’s record has rollercoastered so far this season. After dropping their first two matches, the Patriots defeated both Macon-East and Evangel before falling to Lee-Scott.

“I think we have a good chance at making a run at a state title,” Jaylan Reynolds, Pike’s only senior, said. “We have improved a lot since we started and if we keep getting better who know what can happen.”

Reynolds led the team with 11 kills on Tuesday and has been a leader on the court for a very young Patriot squad.

“Anything you ask her to do, she does it,” Avant said. “You can’t ask for much more than that.”

Reynolds also had a dig, ace, and two blocks in the contest.

The Lady Patriots had several good rallies in the match, a sign Reynolds feels is needed.

“I think it shows that we a playing together more,” she said. “There is always room for improvement but the chemistry is starting to show.”

One of Avant’s underclassmen who has stepped up is Mackensi Johnson. Johnson, a sophomore, picked up 10 assists in the victory.

Pike’s next three matches will be against region opponents. They will take on Morgan on the next two Mondays and also Ft. Dale again this Tuesday.

The junior varsity squad also won an exciting match against the Eagles. The Patriots were victorious by the scores of 25-14, 20-25, 16-14. Cat Crowe led with six aces.