Age of the Trojan 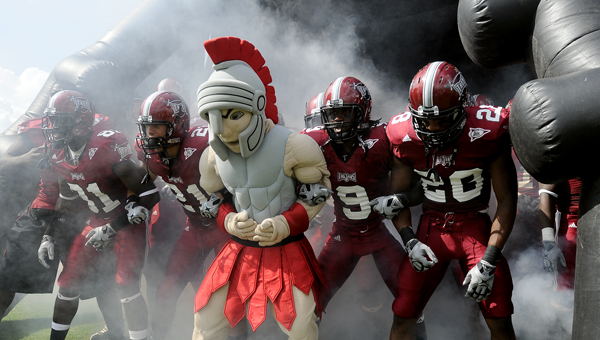 Members of the Troy University Trojans football team prepare to take the field before an NCAA college football game against Arkansas State on Saturday, Sept. 25, 2010, in Troy, Ala. (Messenger Staff Photo/Thomas Graning)

In case you haven’t noticed, the college football season has arrived. The Men of Troy will travel to Clemson, SC, to take on the Tigers of Clemson University today. Kickoff is set for 2:30 p.m CT.

This will be the first ever meeting between the teams Clemson is, however, 5-0 all time against Sun Belt Conference opponents. The Tigers, most recently, defeated North Texas 35-10 last season.

Clemson head coach Dabo Swinney is a 1993 graduate of the University of Alabama and holds a 19-15 record coming into his third season at Death Valley.

The Tigers have won 21 of their last 27 season openers.

Troy comes in picked to finish second in the Sun Belt by the coaches but are looking to claim their sixth consecutive conference crown.

The Trojans averaged nearly 300 yards of passing offense in 2010 and will but the Clemson defense to the test behind returing starting quarterback, sophomore Corey Robinson.

Robinson finished last season with over 3700 yards and 28 touchdowns.

Running back Shawn Southward also returns. The junior rushed for 623 yards and seven scores a year ago.

James Brown will anchor the offensive line at left tackle. Brown has started 26 consecutive games for the Trojans. Left guard Kyle Wilborn has the next closest streak, offensively, with 20.

Punter Will Goggans leads the team with 39 straight starts.

Linebacker Xavier Lamb returns and was the team’s top tackler last season (91). Defensive end Jonathan Massaquoi is expected to have a monster year landing him on multiple award watch lists.

Though inexperienced the Trojans will start five seniors on defense. On the flip side, Troy will send out only two offensively.

Head coach Larry Blakeney enters his 21st year at the helm in Troy and ranks ninth among active FBS coaches.

Troy looks to participate in a bowl game for the fourth consecutive year. The Trojans defeated Ohio, 48-21 in the New Orleans Bowl last year.

The last time the Trojans faced an ACC member was in 2006 against Georgia Tech. Troy has also faced Florida State, Virginia, Maryland, and Miami since joining the FBS in 2001.

Troy returns only three starters offensively while six will suit up on the defensive side.