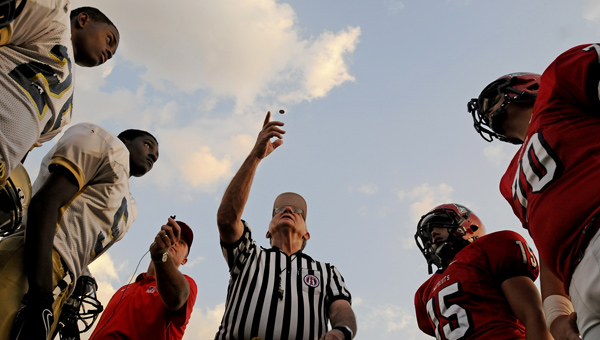 There were some technical difficulties with the lighting at Delaney Kervin Stadium that forced both teams to play on a partially illuminated field.

It wasn’t like the Patriots needed it, however, as they were too busy lighting up the scoreboard bright enough for everyone to see as Pike Liberal Arts thrashed Lyman Ward Military Academy 41-12 to open up their 2011 pigskin campaign.

“I thought we played with a lot more intensity than we did last week and I was proud of our guys.”

There was one damper that came with the Patriot victory, however. Dustin Newman was carried off the field via stretcher after receiving a violent hit on a kick-off return early in the first quarter.

“Right now our mind is on Dustin and praying that he gets well.” Kilcrease said.

Nevertheless, the Patriot attack was in full force tonight as Pike dominated the Ranger defense on the ground with 297 rushing yards.

“We feel like we can run the football and we did a good job with that tonight,” Kilcrease said.

“We’re mixing in some different things and we know we’ve got to be able to throw the football and get better, but I thought we did some good things there. We’ve just got to keep working, come back on Monday and continue to work.”

Senior running back Nick McLaughlin carried the load the majority of the game, rushing for 174 yards on 14 carries with two touchdowns.

The Patriots scored early with a quick opening drive that saw quarterback Josh Starling end the drive with a 13-yard rushing touchdown that only took 3:17 off the clock for the Patriots to be up 7-0 early.

Starling, who has been nursing an ankle injury, looked to be back in full health, as he went 3-6 for 57 passing yards, along with 31 rushing yards.

After a quick three and out by Lyman Ward, the Patriots would cruise down the field, this time with McLaughlin scoring the rushing touchdown from four yards out.

The Rangers would swiftly hand the Patriots the ball back after a fumble on a kickoff return and later see McLaughlin throw to Jacob Watkins in the endzone to make the score 20-0 (The extra point was blocked).

After another Lyman Ward punt, the Patriots would strike again on Kyle Boswell’s touchdown run making the score 27-0.

Lyman Ward’s third straight three and out saw the Patriots strike just before the end of the half when Starling would hook up with Watkins for his second receiving touchdown of the night to put the Patriots in command, 34-0.

Moments later, a special teams blunder saw Pike give up their first touchdown of the season when the Rangers returned a kickoff back for 82 yards just before the halftime interval to make it 34-6(the point after was missed).

“The two most important plays in a football game are punt team and kickoff team, they’ll get you beat faster than anything,” Kilcrease said. But we’ll come back Monday and fix those mistakes.”

The Patriots gave up another touchdown when Starling threw an interception midway through the third quarter that was returned for a touchdown to make the score 34-12 after the Rangers failed on a two-point conversion.

The final score of the game came near the end of the third quarter when McLaughlin bumped and bruised his way into the endzone on a 15-yard run to cap the scoring at 41-12.

The Patriots travel next week to Cecil to take on Macon-East Academy. Kickoff is scheduled for 7 p.m.