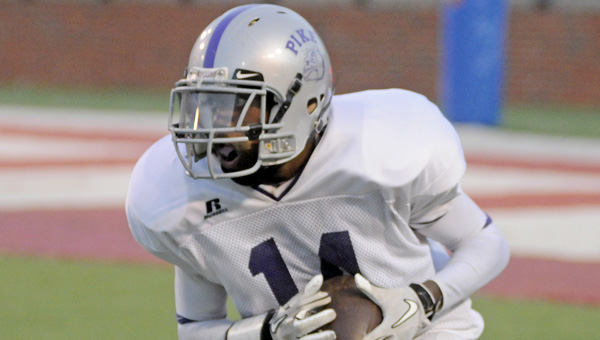 Pike County senior wide receiver Quadry Greasham is a football player who can do a little of everything to impact the outcome of a big game.

Whatever it is kickoff and punt returns, catching passes or playing defensive back, Greasham is considered the ultimate playmaker for the Bulldogs.

Greasham was one of a few bright spots in 3A Pike County’s 27-0 setback to the 5A Charles Henderson Trojans in the annual pre-season jamboree at Veterans Memorial Stadium in Troy Friday night.

Greasham is known for his ability to catch passes over the middle and turn a short gain into a big play against any opposing defense with great lateral movement and speed.

While he certainly hasn’t drawn much attention from collegiate scouts at this point, Greasham could change his outlook with a huge final season for the Bulldogs.

Pike County head coach Rodney Dollar said Greasham is definitely the most versatile player on the roster heading into the new campaign.

“He is a receiver, defensive back, punt and kickoff returner,” Dollar said. “He does everything. He’s got playmaking ability. He will do some of things (former Troy player Stanley) Jones did for us (at Houston Academy). He’ll be all over the place.”

Greasham said the Bulldogs hope to correct things most fans don’t always notice with the naked eye that wasn’t always executed well during the jamboree.

“It was a great experience for us,” Greasham said. “We’ve got to get on our small stuff. Once we get our line, catching and focus in, this team will be good.”

Greasham, who made a decent number of catches against the Trojans, said he gives credit to the PCHS teammates for his success.

“I feel like I played alright,” Greasham said. “I give most of the credit to our line for blocking to give me the chance to get open.”

Greasham said he is more concerned about the Bulldogs bouncing back in their regular-season opener on the road this Friday against 1A Notasulga. Kickoff is set for 7 p.m.

“We have to stay in focused and get in better shape,” Greasham said.

Despite Friday’s loss, Greasham said he is excited about the changes Dollar has made regarding the mindset of the program during the off-season.

“He’s a good positive coach that comes in with goals and expectations,” Greasham said. “We have more discipline on this team than we had last year because of him.”