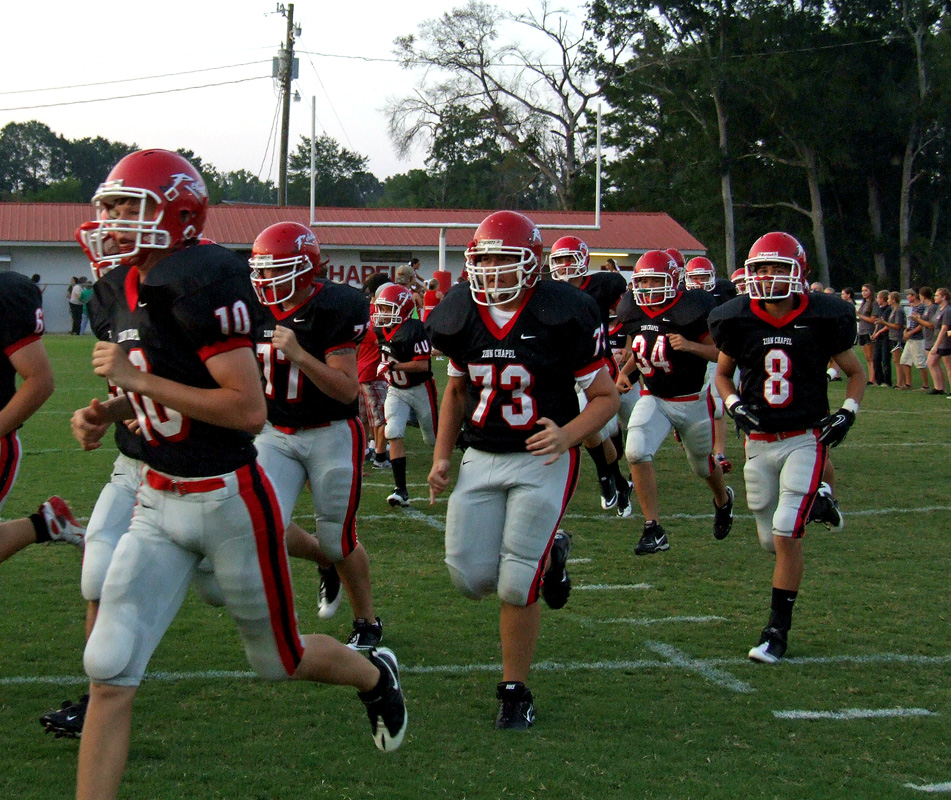 JACK – The Wicksburg Panthers ran over, around, and by the Zion Chapel Rebels en route to a 47-20 win in a pre-season scrimmage Friday night in Jack.

The visitors from Houston Country used a double wing based offense attack and huge plays to roll up over 450 yard of offense, with the majority of it coming on the ground.

Wicksburg had seven plays that went for at least 30 yards, including a 97 yard touchdown run that turned momentum back their way early.

After the Zion Chapel offense quickly went three-and-out on the game’s opening possession, Wicksburg wasted little time cashing in.  The Panthers marched 51 yards in just six plays to draw first blood and take a 7-0 lead.  Another three and out by the Rebels, and touchdown by Wicksburg gave the notion that the game might take an ugly turn quickly.

Two series later, Zion had caught a break.  The Panthers fumbled the ball deep in the own territory and the Rebels recovered, giving the home team a prime scoring opportunity.  On the second play of the series, the handoff exchange between quarterback Mickey Cox and running back LaMarcus Adair went awry.  Wicksburg recovered the fumble, and two plays later struck the crushing blow, a speed sweep to the left side of the offense that turned in to a 97-yard touchdown run.

The speed sweep proved to be a potent weapon for the Panthers, scoring touchdowns with it on four plays.

The Rebels were able to move the ball at times during the contest, racking up over 350 yards of offense on the night.  Zion Chapel could never recover from the early deficit and Wicksburg pulled away in the second half.

“We have to work on our effort a little bit” said Zion Chapel Head Coach Mike Waters after the game.  “We had some guys get down and give up early, and if we want to win ball games, that can’t happen.”

The Rebels look to regroup before next week’s opening game against the Pleasant Home Eagles.  Pleasant Home defeated Zion by the tune of 27-0 a year ago, and is an improved team, especially on offense.

“They (Pleasant Home) have gone to the spread” said Waters. “They will have new quarterback that transferred in from Crestview (Fla.) and he can wing it pretty well. We will have to be ready to play a full four quarters next Friday night.”

Dusting up the memories