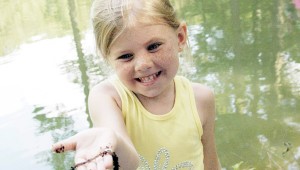 MESSENGER PHOTO/JAINE TREADWELL
Abigail Wilson liked fishing but she didn’t care too much for worms. However, she decided if she planned to do much fishing, she’d better learn to touch a worm.

“Some kids caught a stringer of fish and some caught one or two but everyone was a winner because every kid got a prize and we had some really great prizes,” Jinright said.

The kids with the greatest total weight of fish caught in each age group were awarded cash prizes. 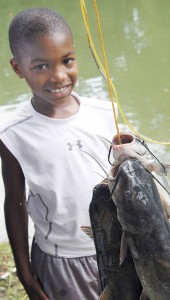 MESSENGER PHOTO/JAINE TREADWELL
Kameron Christian caught a big stringer of fish that weighed in at 10 pounds 14 ounces. That was enough weight to earn him the top fisherman in the 5-7 age group.

Dylan Henderson landed a 4.11 pound catfish and won the big fish award. Conor Rady took the prize for the smallest fish with a 3-ounce keeper. Both young fishermen were rewarded with camo bags stocked for fishing.

Ken White, a former outdoor writer for the Eufaula Tribune, has attended more Pike County Kids’ Fishing Day events than he has fingers and thumbs.

“Clay Hill Farms is a beautiful site for an event like this,” White said. “The pond is absolutely the right size for kids to fish. It’s well maintained and has shaded and open areas. It can’t be beat as a place for families to fish.”

“Take a kid fishing and you’ll remember it for a long time and so will the kid,” he said. “It will be a time to look back on with fond memories.”

Hannah Helms of Troy is a veteran of Kids’ Fishing Day. She comes with her granddad, Ronald Helms, and they’ve only missed a couple of times in 12 years. 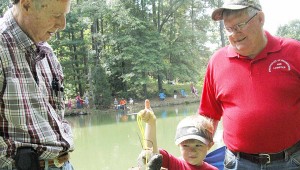 MESSENGER PHOTO/JAINE TREADWELL
Little Jack Redmon of Goshen was anxious to show off his stringer of catfish to John Dorrill, left, who along with his wife, Carol, hosted Pike County Kids Fishing Day at Clay Hill Farms Saturday. Mike Jones also stopped to admire the young fisherman’s catch of the day.

“Fishing is our time together and we always have fun,” Hannah said. “We both like to fish and we don’t have to catch anything to have a good time. We like being outdoors and doing things together. Fishing, we do both.”

The duo fishes private ponds and lakes but kids’ fishing day was the beginning of it all.

For Cadee Niu, Saturday was her first “formal” fishing day and, after a “long time” fishing, she had caught only one fish. “But fishing is fun,” she said. “Catching one was good for me.”

Jenesin McClure caught what might be called a king fish because of its size. She also caught a “baby fish.”

“We’ll eat the king fish but we threw the baby fish back so it can grow some more,” she said.

“There are some really big catfish in the pond,” said John Dorrill, who along with his wife Carol, hosts the annual free fishing event for kids at Clay Hill Farms. “I was glad to see a good number of the big catfish caught. It was a good day for fishing. Fishing is a great way for families to spend time together. We look forward to kids’ fishing day every year.”