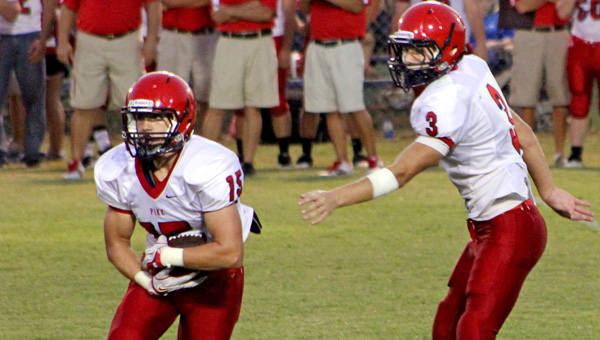 LUVERNE – What started as a blowout game for the Pike Liberal Arts Patriots in their jamboree against Crenshaw Christian Academy quickly turned into a tough dogfight due to penalties and some serious error late in the game.

The Patriots tough-fought 28-21 victory over the Cougars began with a good showing from starting senior quarterback Nick McLaughlin, who led the offense on the ground with a rushing touchdown early in the first.

McLaughlin would go on to record another rushing touchdown in the third as well as a pass to fellow senior Lawson Stewart for another third quarter touchdown.

The Patriots weren’t just putting on a dominating offensive show in the first half, but were able to capitalize on poor Crenshaw ball handling and multiple penalties.

The Patriots held control of the game until well into the second quarter, having posted a 14-0 score before Crenshaw was able to mount a comeback.

With seven minutes left in the first half Crenshaw posted their first touchdown of the night on a big run by Chris Wooten, following up with a successful PAT to get within striking distance of the Patriots.

After the touchdown cracks began to appear in the Patriot lineup in the form of a fumble on their next drive, which they recovered, and a big sack on junior quarterback Taytom Barnes to put them in a third and long situation.

After returning from halftime the Cougars were able to even the score at 14-all on a touchdown pass to Austin Brown from the 31 yard line.

On the very next drive McLaughlin turned in one of his two rushing touchdowns to make it a 21-14 game.

The Patriots were then able to put the final nail in the coffin on a long drive that saw several carries by McLaughlin before a jump pass to Stewart put them in the end zone to make it 28-14 with only minutes left in the third.

Despite recovering a fumble to end the third in scoring position the Patriots quickly lost the ball to the Cougars on first and goal.

With the ball back in hand the Cougars went to work, driving up the field on a big run by Gunner McCollough that led to a touchdown.

With the score at 28-21 in the fourth the ball changed hands for most of the fourth until with only a few minutes left the Cougars found themselves in Patriot territory.

With only 1:03 remaining in the game and overtime looming, the Cougars made a fatal mistake on a pass that was intercepted by senior defensive back Garrett Herring.

With the ball back in hand the Patriots were able to safely run the clock and end the game at a scary 28-21 for a preseason victory.

“It was your typical first game,” Patriots head coach Steven Kilcrease said. “Sloppy at times but we saw some good things out there. I thought we defended well and did some good things on offense but we’ve still got a lot to improve on.”

The Patriots will kick off their season on August 26 with a home match against Lyman Ward Military Academy.