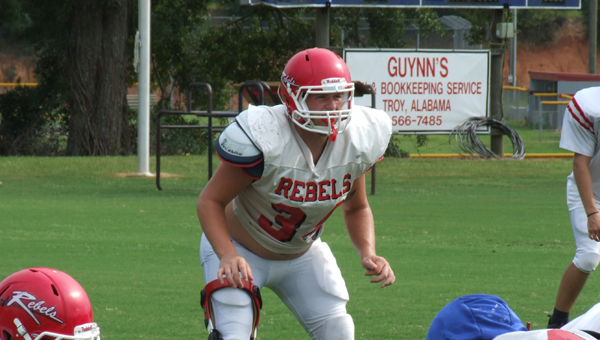 Blake Powell will return from a leg injury to help lead the Zion Chapel Rebels in 2011. (Photo/Ryan McCollough)

When most players glance up at the scoreboard and see that their team is down 42-0 late in the fourth quarter, they tend to give up.  Especially when the team standing across the field from you is the number one ranked team in the state.  Even more when it’s the last game of the season. Blake Powell found himself in that exact situation October, 30th 2009. But only one thing was different, he didn’t quit.

Powell drove his team down the field against the Elba reserves in the waning moments of the contest, and lofted a touchdown pass as time expired to deny the Tigers of a shutout win.  He was hit as he let the pass go, and as his teammates high fived and the crowd cheered, Powell laid on the ground in pain.

After missing the entire 2010 season, Powell is back in uniform this year and looking for a fresh start.

“I kind of milked it a little bit during the spring” he said. “I’m getting in better shape every day, and ready for Friday nights.”

Head coach Mike Waters says Powell can help the team on both sides of the ball effectively, by playing multiple positions.

“Blake hasn’t played a whole lot of football for us, but we believe he will help us out a lot this year” said Waters.  “He will primarily be a tight end, but will also get some reps at running back, fullback, and maybe even a little quarterback.”

Powell will also be one of the vital pieces of Bradley Bowers’ defense.  Being a linebacker, coaches expect Powell to make plays all over the field and to help motivate the other defensive players.

Waters’ also pointed out the Powell brings more to the table than just athleticism.

“We have asked Blake to lead in the positive, right way” said the Zion Chapel head coach.  “He bought into what we were saying and is just a great leader for the younger guys. I’m really proud of him, not only for continuing to play but also, to help the other players.”

Powell and the rest of the Zion Chapel Rebels will get the season started a week early, when they host the Wicksburg Panthers in a jamboree game at Green Memorial Stadium in Jack on Friday.