Exley stands out in Troy’s scrimmage 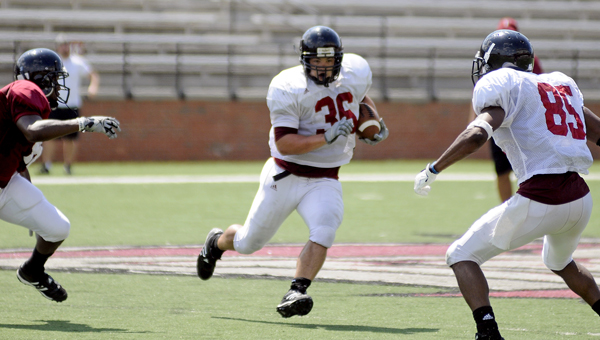 He’s not a five-star prospect or a blue chipper. He’s not on ESPN’s Top 100 or on any scouting website’s watch list but he definitely stood out among spectators at Troy’s scrimmage Saturday afternoon.

Brian Exley carried the ball only eight times for 53 yards but the powerful running back from Hartford left more bruises on Troy’s defense than any statistician could count.

Exley was approached by Troy coaches his senior year at Geneva County High School but elected to hold off on attending school for a while. Three years later, Exley asked to join the Trojans program. After being redshirted in 2010, the 5-11, 220 pounder looks to be in the mix in the Troy backfield in 2011.

Not much information exists on Exley as he does not talk to media and barley gives the athletic department enough information for a biography. In fact, aside from his name, parents name, high school, and hometown, their is little else on his TroyTrojans.com player page.

One this is know, however, Exley opened some eyes on the sidelines, in the stands, and in the pressbox. On one carry Exley broke a tackle to reach the visitors sideline, jumped over a player lying on the ground, juked two more defenders, then lowered his shoulder on the last poor soul that stood in his way driving them both out of bounds.

Deceptive or not Sun Belt opponents may be better off running behind him rather than in front.