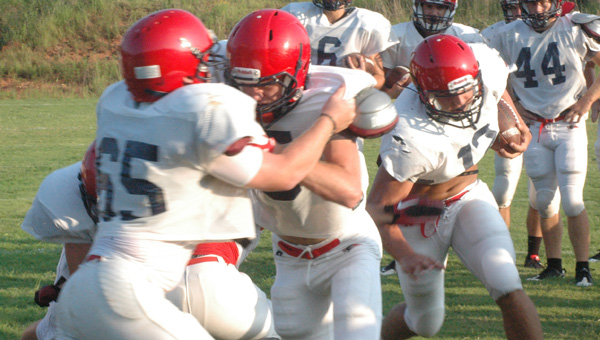 Pike Liberal Arts is looking to fill a void.

The Patriots graduated three of its five starting offensive linemen from last year and is looking to reload their big “hogg maulies” on the frontline.

But despite this loss, Kilcrease remains optimistic.

“We’ve got a good group coming back,” Kilcrease said. “We’ve got 21 seniors and a lot of those guys are lineman. They’ve all had a very good three to four days of practice and if we keep improving, then we can hopefully fill those holes.”

Last year the offensive line played a key role to Pike’s rushing attack that averaged 210 rushing yards per game and put up a whooping 40 points per game.

“Most of those guys played for three years.” Kilcrease said.

“It’s going to be a bit different for us, but we’ve got some guys that have played back up roles for these guys for three years as well.”

As far as who fills the void, that question still remains up in the air and too early for a final decision to be made.

“Really we’ve got about 10 to 12 guys that are working up front,” Kilcrease said.

“At this point, I have no clue. It could be any one of them.”

Kilcrease also gave praise to the players for working so hard, taking the challenge of filling this void and turning it into a stiff and close competition.

“It’s got a lot to do with the work ethic that the guys that we got right now and they’re working extremely hard. We’ve seen a huge difference from Thursday until now, and that’s big for us,improvement wise.”

The Patriots finished 9-3 last season losing in the second round of the AISA State Playoffs to Monroe Academy, 37-7.

Pike will play in a jamboree against Crenshaw Christian Academy on August 19 and kick off their 2011 campaign versus Lyman Ward Military Academy August 26 at Dwight Ward Field.

Two of the Patriots’ three loses came at the hands of Monroe, who outscored Pike72-7 in the two contests. The other loss came in a 27-26 decision to Fort Dale in the seventh week of the season.