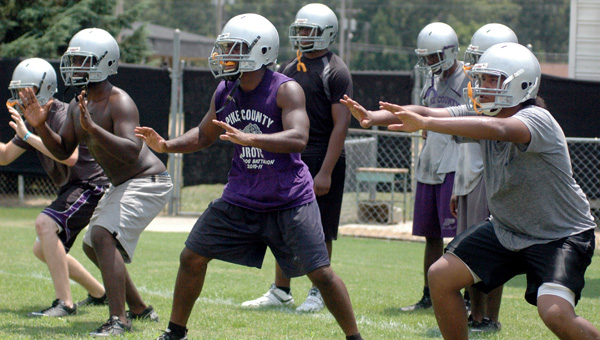 BRUNDIDGE – It’s here and it’s official. Football season has arrived and Pike County High School wasted no time in getting to work Monday.

First year head coach Rodney Dollar takes over a Bulldog program that won its first four games last season before losing six of their final seven including a 35-27 decision to Washington County in the first round of the AHSAA playoffs to finish at 5-6.

Dollar brings with him an entirely new coaching staff that he feels will make a difference in the win column.

“I was fortunate to be able to bring in good coaches,” he said. “Their work ethic is unreal and will really help this team.”

Richard Anderson comes to PCHS having served with Dollar in his time at Houston Academy in Dothan. Anderson will run the defense for the Bulldogs and also serve as assistant head coach. Donny Smith will work with backs and receivers and help run the offense with Dollar.

Junior Louissaint returns from assisting at PCHS last season as the offensive line coach. Louissaint played as an offensive tackle at Troy University before joining the Bulldog coaching staff.

Don Moore, who played for Dollar at Frisco City, will assist with offensive and defensive backs.

Josh Peters rounds out the staff. Peters will work with special teams and offensive centers.

Dollar says this week will be filled with conditioning and teaching.

“We will work on our passing, our pass routes and our pass defense,” Dollar said. “The main thing is to get out system down.”

The Bulldogs will have a very capable quarterback leading the offensive in preparation for the season. Marlon Meadows, who filled after a injury at quarterback last year, will return his senior season to command Dollar’s offense. Senior Quandry Greasham will certainly be one of Meadows’ favorite targets lining up at wide receiver.

Last season, while Dollar was at Tallassee High School, the Tigers held a 28-7 lead coming out of halftime. The Trojans lead a furious comeback and scored a late touchdown leaving them an extra point away from tying the game. Tallassee was called for being offsides on the extra-point, however, and Charles Henderson elected to try for a two-point conversion and the lead. Dollar’s Tigers would make the stop at the one-yard line and claim a 28-27 victory at Veterans Memorial Stadium.

“They’re going to be big, physical, and well coached,” said Dollar. “We’ll have to play well to beat them.”

The preseason jamboree game will the played in Troy on August 19.

Pike County will then open its regular season with another road game against Natasulga on August 26.The Bulldogs will return home in the second week of the season to face region foe Slocomb High School.

Pike County finished with a 4-3 record within their region to earn a playoff berth.

The Bulldogs outscored their opponents 295-268 in 2010 and picked up three of their five wins at Bulldog Stadium.