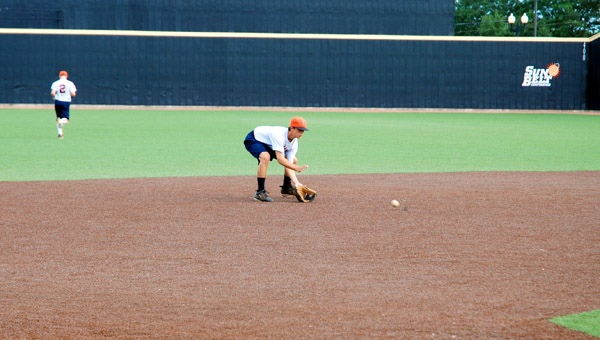 With all of Troy’s recreation team eliminated from postseason play, there is still one local event in which baseball fans can catch some quality action before football season.

Four teams will battle in a double-elimination format to represent the state of Alabama in the  American Legion World Series Tournament in Shelby, N.C. August 12-16.

Teams arrived in Troy yesterday at took part in a practice session at Riddle-Pace Field before heading off to check in to their on-campus lodging.

Tournament Director Frank Hannah feels Troy is the perfect location for the event.

“Troy’s facilities are great,” Hannah said. “With the play surface you don’t have to worry about rain outs and the university treats us very well.”

The tournament is in its fifth year at Troy University and Trojan assistant coach Mark Smartt is impressed by the quality of competition.

“A lot of these guys are playing in college already so the quality of play is very high,” he said.

In recent years, some future major leaguers have made their way to the state tournament two, of which, pitched in the most recent MLB All-Star Game. New York Yankees pitcher David Robertson played for Tuscaloosa Post 34 and Atlanta Braves closer Craig Kimbrel pitched for Decatur Post 15.

Hannah says fans will have the opportunity to watch some future college and potential professional stars this weekend.

“Most all of these players will be college bound,” Hannah said. “Most of them are already there and will be moving to Division I or above.”

Live stats will be kept during all of the games and can be viewed by going to the Legion’s website, www.alabamaamericanlegionbaseball.com.

There are eight senior Legion teams that compete in a sub-state tournament to earn a berth to Troy. Tuscaloosa Post 34, who has won state four consecutive years, was eliminated by  losing to Florence and Dothan.

Columbiana and Dothan will kick off the action at 4 p.m. today.

Admission is $10 per day and $25 for a tournament pass. Tournament t-shirts will also be available during the games for $12. All proceeds from the gate goes to help funds American Legion tournaments and events.