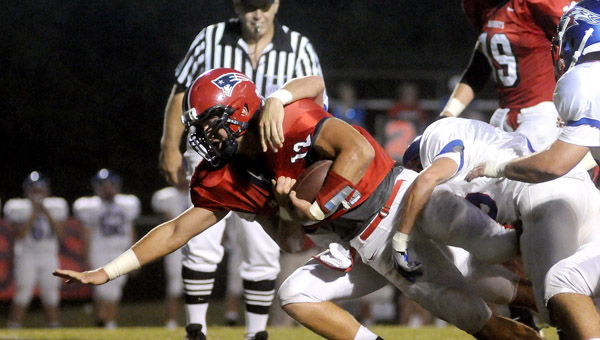 For any other team, a 9-3 record would be an accomplishment. Pike Liberal Arts, however, isn’t any other team. Winning back-to-back AISA State Championships in 2008 and 2009 helped set that standard for the progam and Nick McLaughlin is determined to see standards remain high.

McLaughlin and the Patriots are primed to make another run deep into the playoffs and the senior is putting in the effort to get them there.

Pike’s starting tailback and linebacker lifts weights with the team every morning but for him that isn’t enough.

“I’ll lift again in the afternoons depending on what our schedule is,” McLaughlin said. “It’s what I like to do so it’s fun.”

This has been McLaughlin’s routine for some time and doesn’t seem to be slowing in his final season.

“I’ve been doing it that way for a couple of years now, it’s just how I get ready for the season.”

Pike will return only two starters on the offensive line but looks to have the skill players to compensate for the inexperience.

“We’ll be young on the line,” says McLaughlin. “But Coach (Steven) Kilcrease will work us hard and get us ready.”

“Josh Starling will be strong at quarterback and our receivers should be good as well.”

Competing in 3A, the AISA’s highest classification, can sometimes be brutal. McLaughlin feels that while the Patriots can’t overlook anyone, one game stands out among the others.

“We definitely want to beat Monroe, we play them early and that can set the tone for us.”

The Patriots face Monroe Academy in the third week of the season. The Volunteers defeated Pike twice last year, including in the second round of the playoffs, by a combined score of 72-7. Monroe would eventually lose to Fort Dale in the state championship game.

While McLaughlin is excited about the upcoming season, his future beyond high school is still in the air.

“I’ve talked to Air Force about playing football and some other schools about baseball,” McLaughlin said. “But I’m just going get ready for this season and worry about that later.”