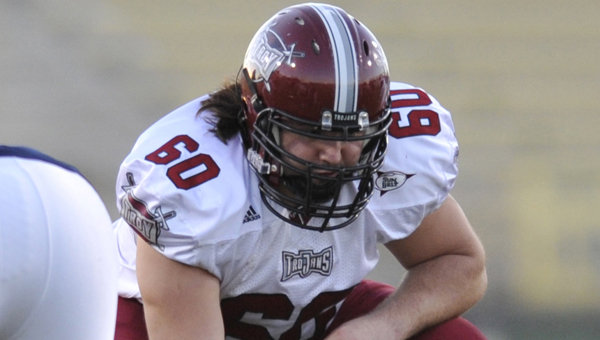 When Troy lines up for their first offensive play in less than six weeks against Clemson, Zach Swindall will have already achieved a milestone in the Trojan football history books. The senior center will become the first Troy native to start a football game since Julius Pittman in 1991.

Swindall, a Charles Henderson High School graduate, is expected to be Troy’s starting center when the 2011 season opens. Zach says he is anxious and excited to get the opportunity to wear the Cardinal and Black.

“I’m ready to get started,” Swindall said. “ I’m excited about the opportunity.”

Being a Trojan center is a little more complex than just making sure the quarterback receives the snap. In Troy’s system, Swindall is responsible for the cadence before the snap, blitz recognition, and making any adjustments to either.

“It’s an important job,” he said. “You have to know when a defense is going to be aggressive or not and use that against them.”

The 6-foot-1, 287-pound senior also credits past greats to his personal success.

“Guys like Tyler Clark and Danny Franks helped a lot; anytime I had a question they would give me advice that has gone a lone way.”

Swindall redshirted in 2007 before seeing limited action in 2008. In 2009, Zach played in four games totaling 40 snaps and recording five knockdown blocks. Last season, he would again play in four games as a reserve against UAB, Arkansas State, Middle Tennessee, and Florida Atlantic.

The biggest change Swindall says from high school to Division I is blistering pace at which Troy runs its offense.

“The tempo of the game is key for us; when we can get moving quickly we can strike at any time.”

Life as an offensive lineman isn’t always glamorous but that doesn’t mean the boys in the trenches don’t have fun.

“When you see the other guys dragging and we’re on the line ready to run another play, it always makes you smile,” says Swindall.

And what about a lineman’s dream of scoring a touchdown? Swindall feels he knows just the play to call.

“I’d call a fade to the back corner of the endzone. One-on-one jump ball would be how I would score.”

While an offensive lineman scoring would be one for the highlight reels (e.g. former Trojan Junior Louissaint versus Missouri in 2004), Swindall says he has his sights set on knocking off Clemson.

“We don’t play for moral victories,” he said. “We’re going up there to win.”