Smith focuses on ‘doing it right’ 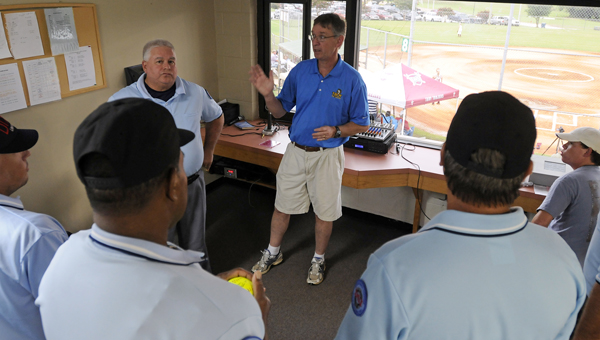 In 21 years with the Troy Parks and Recreation (TPR) Department, Director Dan Smith has planned a lot of events. He has watched a lot of games, driven a lot of miles, met a lot of people, and seen a lot of smiles.

Smiles are what Smith strives for when he brings a tournament to Troy; whether it’s on the face of a player or his employees that is what he wants the overall experience in Troy to be about.

“When we host a state tournament or a World Series, there is no question that for some of those children, that will be the only state or World Series they will ever go to in their life,” Smith said. “We want to make sure that it is everything they expect it to be.”

Over the years, Smith, who became director in 1995, has well exceeded those expectations. Troy has hosted three World Series, two Dixie Boys and one O-zone, and more than 10 state tournaments with each being a little different than the last.

“Our (Troy) teams have been to a lot of cities and played in a lot of tournaments and we see things that we would like to do in Troy and also some things we want to make sure we don’t do,” Smith said with a grin. “But, we will try something once and maybe not do it again; it’s kind of like mixing ingredients for a recipe.”

The main ingredient, it appears, in Smith’s recipe is sugar. Little things go a long way whether people realize them when they happen or not and TPR does the little things extremely well.

Last week during the Dixie Belles state tournament, several players participating had birthdays during the week-long event. Smith made sure this was recognized by having a cake delivered to the field and “Happy Birthday” sung after the game. The cake didn’t break the department’s budget and the singing, other than a few high notes, wasn’t that bad either. But the result in that little bit of extra effort was smiles.

“A birthday is the most important day in the life of that child’s family, we want to acknowledge that and help them celebrate it.” 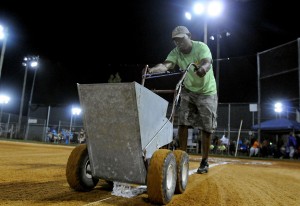 A member of the grounds crew paints the field between games in the 2011 Alabama Dixie Belles State Tournament in Troy, Ala., Friday, July 15, 2011. (Messenger Staff Photo/Thomas Graning)

Up to 60 workers are required to run a tournament which includes staff members, concession workers, grounds crew, umpires, and scorekeepers.

The typical day for a grounds crew member begins at 4 a.m. where they clean and prepare the park for the day’s action and can end past midnight.

“Our grounds crew takes great pride in what they do,” Smith said.

Donald Kelley, Earnest Downing, Joe Scott, Judy Tillery, Darius Carlisle, Carlos Carlisle, Vernon Bryant, Lewis Stinger, and Jacob Campbell make up Smith’s all-star crew.
Smith and other essential personnel members begin to pour in around 7 a.m. Sound systems are then set up along with any administrative duties that may need tending to.

“We just make sure that we have everything in place and ready for the day.”

With the amount of duties and moving parts at an event, Smith says great organization is the key to ensuring that everything runs according to plan. Smith references his “tournament bible”, a blue, three-ring binder, to help keep things in order. In 1995, those skills would be put to the test as the Dixie Boys World Series came to Troy.

“Sandy Jones, the recreation director in Eufaula, gave me his tournament binder from a previous World Series,” Smith said. “I used that as a blueprint and, thankfully, everything went smoothly.”

Over the years, Smith said he has added and subtracted from some of the things in his binder but overall it is used to lay the organizational foundation for any tournament Troy hosts.

One of the things removed after the 1995 World Series was the concept of giving every coach a cell phone in order to have a direct line in the case of changes or emergencies.

“We had this great idea to give all 12 coaches a cell phone; as it turned out none of the coaches knew how to use a cell phone and kept them turned off.”

One of the investments that have paid off is the one made by the City of Troy. The Troy Recreation Department has facilities rivaled by very few in the state.

“The City of Troy, our mayor, city council, and everyone involved has made the commitment and investment in our recreation department and that’s where it all begins,” Smith says. “Troy University is always there to help we need them and that goes a long way.”

Smith also credits his coordinators with the success of the department over the years.

“David (Dickey), Pam (Nix), Cindy (Dukes), and Gail (Jones) all have a lot to do with anything that goes on in a tournament and without them it would not be possible.

Through all the time, effort, and work Smith says the biggest reward comes from the visiting teams.

“Troy is the epitome of southern hospitality and when I get compliment from other city’s coaches, players, and fans it make me feel like we’re doing it right.”