Game for the ages 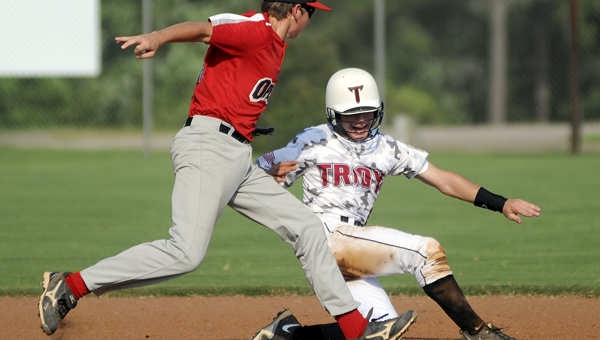 Troy Dixie Boys player Hunter Baggett falls after being tagged out in a run down by Opelika's Mathew Christian during the championship game of the 2011 Alabama Dixie Boys state tournament in Enterprise, Ala., Wednesday, July 20, 2011. (Messenger Staff Photo/Thomas Graning)

It was one of those games that you needed to marinate for a while to fully appreciate what you just witnessed.

Wednesday night Troy and Opelika played, arguably, the greatest postseason recreation game in Troy history. It was really that good. Opelika swept Troy out of competition, 5-1 and 10-9, when their backs were against the wall.

A lot of times one might hear reference to a game as a “good” game or a “great” game when the finish is exciting. Wednesday’s game was exciting from start to finish.

Take off your camo-colored glasses for a second and really think about the game as a fan of the sport. This contest had great pitching, great defense, timely hitting, and very few mistakes.

Troy fell in the first game to the hand of outstanding Opelika pitching and defense. Austin Ingram pitched a decent game, not his best, but a solid game at the least. Troy left 13 runners on base, nine of which were in scoring position. They had their chances and failed to produce, that’s all there is to it. Troy left the bases loaded in the fourth and had them jammed again in the sixth with no outs and both times came away with nothing.

Ingram helped himself in the fifth with a solo home run but also hurt himself by leaving too many pitches over the plate, allowing seven extra-base hits including a 2-RBI triple in the third.

The second game, however, would see both teams unveil their fangs and gnaw each other to the bone.

The game had it all. Homeruns, diving catches, plays at the plate. It had everything. It saw five ties and six lead changes in 10 innings and not a single pitch was unimportant.

In the fifth after Opelika had tied the game at 5, Troy was in trouble with the bases loaded and two outs. Opelika’s Austin Mitchell hit a bounding ball to the right side of the infield and like a blur as Reilly Fox dove to his left, snared the grounder and flipped to first creating an electric atmosphere in the Troy stands.

Devin Hooks collected an RBI single in the seventh to give Troy a late 6-5 lead. Opelika was down to their final out when Berry Dudley looped a single in to center tying the game and placing the winning run at second. Chase Hartley, now facing Opelika’s lead off batter, broke off a curveball that looked like it had sucked into a black hole to get the strikeout.

Troy burst open a three run lead in the eighth. With one out, Hunter Baggett chopped a single into left. Hixon, amongst classless jeers from the opposing bleachers, ripped a double off the left field wall to score Baggett and once again put Troy ahead, 7-6. Two pitches later Ingram blasted a 2-run homer to dead center sending Troy fans into frenzy.

Entering the bottom of the inning Troy fans breathed a little easier and even more so after two groundouts put Troy one retiree away from the Dixie Boys World Series. Like a poorly trained dog, Opelika would not lay down.

Single. Double. Double. Single. The game was tied was quickly it was hard to keep score. When Mitchell stepped into the box with a chance to end the game he had redemption on the brain. He would line a single into centerfield in front of a charging Hixon and with a hop and a throw each team’s destiny hung suspended in air. Then, with a brief flash of a sweep tag from Ingram, Troy was alive.

Opelika would score in the 10th and advance to Beaufort, S.C. but the quality of play both teams displayed will be remembered for years to come.

Head coach Gary Fox coached his best game of the postseason. With the team’s sometimes overly aggressive mentality, Fox pulled back on the reigns and played chess. He was aggressive when he needed to be, he was conservative at the right times and he took chances when they needed to be taken.

With the game tied at 4 in the fifth, Fox put on the safety squeeze and Troy executed perfectly and took a 5-4 lead.

When the only words spoken afterwards are ones like “unbelievable”, “awesome”, “great”, and “best” and even those aren’t strong enough, you know you have witnessed something special.

It was hard not to root and follow this Dixie Boys team. They had movie script type characters. They had the flaky high-strung Jason Fleming, the scrappy, gritty types in Reilly Fox and Hunter Baggett. There was the physically imposing Xavius Burden, the gamer in Austin Ingram. Troy had the “give me the ball” type in Chase Hartley, the unsung hero in Devin Hooks. You saw the fun, outgoing leader in Rush Hixon and the undersized fighters in Cole LaBrant and Baylor Barnes. Guys off the bench like John Michael Renfroe, Trip Roberts, and Patrick Henderson that could step up and produce at any time.

They played hard every pitch and personified what a team should be.

There have been a lot of good baseball and softball teams in Troy and granted, I haven’t been around them all but this team was special even if they came up short of the expectations they set for themselves.