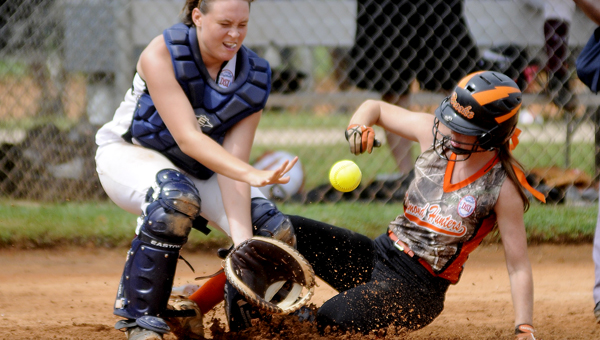 For the third consecutive game, Troy watched an early lead slip away as they were eliminated in the Dixie Belles State Tournament, 10-8, by Valley Sunday.

Troy built a 8-1 advantage before Valley stormed back to defeat the host squad.

Hannah Fountain, who finished 3-for-4,  doubled to lead off the game and scored on a Valley error. Amberlyn Baker would also round the diamond to score on wild throws. Sh’ara Lee singled home Olivia Hudson to put Troy ahead 3-0.

In the second, Kayla Dendy singled and would later score on  Jordan Jacques base hit.

Troy added four in the third. Victoria Outlaw singled and Kristen Finlayson walked before Kym Ross plated them both on a 2-out single. Dendy, the next batter, also delivered a single to score Finlayson. Dendy would come around on several passed balls.

Baker weaved through two innings as Troy’s starter before running in to trouble in the third. With two outs and trying to squash a Valley surge, Baker allowed a single to Reagan Smith. Troy head coach Travis Jacques replaced Baker after she walked her fourth batter of the inning. Hannah Fountain would strike out Brittany Boyd to end the frame but the damage had been done. Troy’s seven run lead had been reduced to one, 8-7.

Troy would produce only two hits offensively in the final four innings.

Valley tied the game on Heather Blackmon’s single to center. A Troy error allowed a second run then Brooke Williams doubled scoring Jessie Thompson to give Valley the 10-8 lead.

Troy attempted to rally in the seventh when Fountain led off with a double but she would be stranded as Valley retired the following three batters to end the game.

Errors and walks plagued Troy the entire tournament as they committed three more miscues and handed out six free passes on Sunday.

In Troy’s three games they held leads of 4-0, 12-2, and 8-1 before seeing all of them evaporate in late innings. Their lone win came in Saturday’s game against Gilbertown when the 12-2 lead turned into a 13-12 deficit. Troy scored twice in the final inning to win the game.

The Dixie Belles State Tournament continues in Troy through Monday with the winner advancing to the World Series in South Hill, VA.