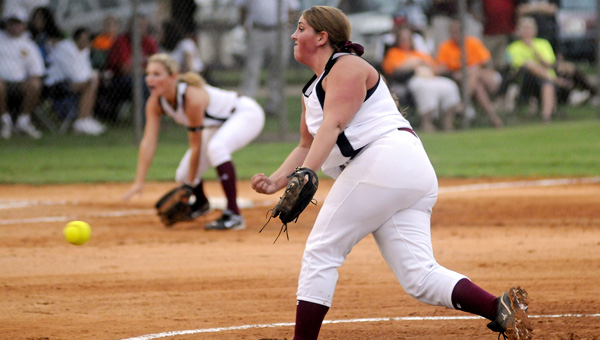 Errant throws and a miscommunication earned Troy a spot in the loser’s bracket of the Dixie Belles state tournament.

Troy fell to Geneva 14-4 in six innings Friday night before a healthy crowd at the Troy Sportsplex.

Troy jumped out to a 4-0 lead in the first inning as Hannah Fountain led off with a double. Amberlyn Baker followed with an RBI single. Olivia Hudson drew a walk before Victoria Outlaw would drive them both in on a triple. Unfortunately, that would be all the offense Troy could muster.

As the rain started to fall in Troy, so did the Geneva hits. They would scratch out two in the third on an RBI single and another on a passed ball.

In the fourth, Geneva collected consecutive singles to collected another run. After a fielder’s choice plated the tying run, Augie Pena smashed a solo homerun to give Geneva the only lead they would need.

The flood gates would open on Troy in the fifth and not from the ominous skies.

After a walk and a hit batsman, Troy picked up the first out on a fielder’s choice. A throwing error after the play gave Geneva a 6-4 lead.

Troy would allow eight runs in the inning on only three hits.

“You can’t throw the ball around like we did and expect to win the game.” Troy head coach Travis Jacques said after the game.

Troy did not collect a hit in the final three innings.

Jacques felt like this was also something the girls would turn around tomorrow.

“Our bats will be better tomorrow; their pitchers did a great job of getting us out.”

Troy will play the loser between West Montgomery Suburban and Gilbertown today at 9:30 a.m.