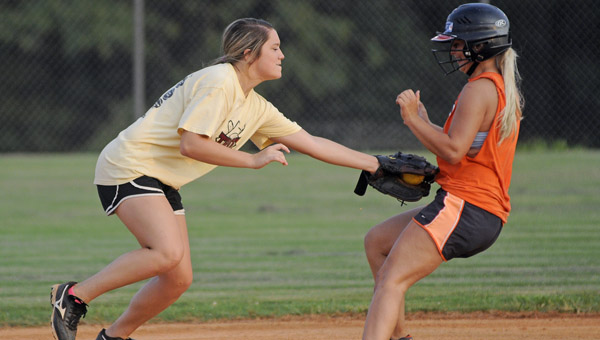 After nearly a month of waiting, Troy’s Dixie Belles will kick off their postseason in the Dixie state tournament beginning Friday.

“We’re ready to play,” head coach Travis Jacques said. “These girls can’t wait to get out there and compete.”

Troy is the host team in the nine-team playoff, therefore, did not need qualify through winning a sub-district and district tournament.

Jacques feels the experienced group is primed to make a run for a berth in the World Series.

“Most of these girls have played deep into the summer before; they are hungry to make it back to state.”

While good pitching and defense is always important, offense is the staple of this year’s team.

“I think we are a well-rounded team but we built this team around offense and our ability to score runs,” Jacques said.

With the offense, hopefully, creating crucial run support Troy’s pitching staff should not be over-looked.

Kristen Finlayson, Hannah Fountain, Meredith Motes, and Amberlyn Baker will anchor the rotation for the Belles.

“We have several good arms,” said Jacques. “I think they can lead us deep into this tournament.”

Kayla Dendy, Jordan Jacques, Sh’ara Lee, Kait Ross, Kymbra Ross, and Mollie Sims will round out the lineup for Troy.

Jacques attributes his confidence in his team to their performance in a practice tournament earlier this summer.

“Some of our younger players really stepped up in that tournament; we didn’t play our best but I was encouraged by what I saw.”

Troy competed with the likes of Brundidge, Ashford, Eufaula, Luverne, and Enterprise in the trial tournament.

Troy will be tested early when they face Decatur in their opening game.

“Decatur has a good team, they wouldn’t be here if they weren’t,” Jacques commented. “I hope we play well enough to compete with them.”

Jacques was also impressed with his team’s desire to win.

“They are definitely a bunch of fighters, they never give up.”

Troy and Decatur will square off Friday at 7 p.m. Opening Ceremonies are set for 6:30.