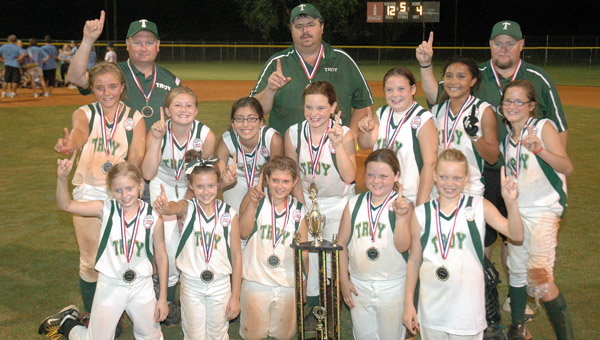 The average time of play for a regulation seven -nning professional softball game is two hours and fifteen minutes. It took a little longer to decide the District 6 champion in Geneva Thursday night.

Troy battled Enterprise in two five-inning games for a combined five hours and thirty minutes before walking away victorious.

Enterprise defeated Troy 11-8 earlier in the day to force the “if-necessary” game.

Troy rebounded to clinch a birth in the state tournament in Scottsboro win a 12-4 win in the nightcap.

In the first game, Enterprise would score first on a fielder’s choice in the first inning.

Troy would answer with two in their half of the first on an RBI single from Sidney Armstrong. Gracie Scarbrough would bat in the Holly Hughes later in the inning.

Troy led 2-1 when lighting delayed the game for 30-minutes but when play resumed the bats heated up for both sides.

Enterprise exploded for five runs after the break on the back of four consecutive hits, three with 2-outs.

In the third, Enterprise tacked on three more before pitcher Molly Sanders settled down and quashed the rally.

Trailing 9-2, Troy’s Angels staged their attempted comeback in the third inning. Bailey Rushing, Sanders, Armstrong, Scarbrough and Nelsey Leverette scored on bases loaded hits by Scarbrough and Hanna Calhoun to bring Troy within one. Enterprise added two runs in the fifth to pull away.

“We didn’t play well in the first game; all we can do is put that behind us and play them again,” said head coach Larry Sanders.

Enterprise answered in their half with four runs to tie the game.

Things got interesting in the second when Enterprise returned a pitcher to the mound after three coaching visits.

Troy then placed the game under protest.

By rule, a pitcher must be removed after the third coaching visit and is ineligible to pitch for the remainder of that game.

Upon further review, umpires upheld the protest and a new Enterprise pitcher was inserted.

“It was a pretty clear cut case,” Sanders said. “The only question was about what the penalty would be.”

Troy would dominate the rest of the way scoring four more runs in the second behind singles from Brook Bennett and Sydni Garrett to stake an 8-4 lead.

Troy would add an additional run in the fourth when Daniels earned a bases loaded walk to score Kelsey Gibson.

After the shaky first inning, Rushing, Troy starting pitcher, settled down and would not allow another runner to cross the plate in picking up the win.

Coach Sanders was proud of the way his team bounced back.

“We played better in the second game; coach Dee Hughes has done a great job helping with our batting and that showed.”

In rout to their championship, Troy defeated both Geneva and Enterprise twice.

The Dixie Angels State Tournament begins July 15, and concludes July 18 with the winner advancing to the World Series in South Hill, Virginia.