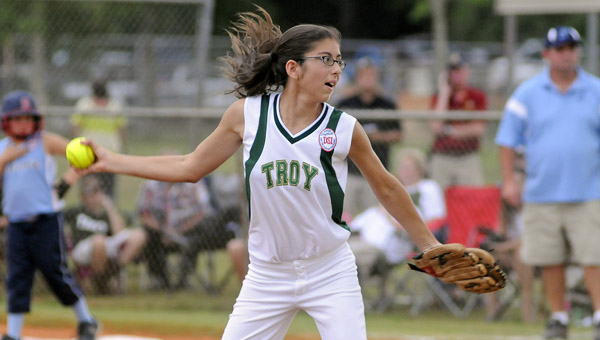 The Dixie Angels were forced to a second game in the championship series against Enterprise on Thursday.

Enterprise would score first on a fielder’s choice in the first inning.

Troy would answer with two in their half of the first on an RBI single from Sidney Armstrong. Gracie Scarbrough would bat in the Holly Hughes later in the inning.

Troy led 2-1 when lighting delayed the game for 30-minutes but when play resumed the bats heated up for both sides.

Enterprise exploded for five runs after the break on the back of four consecutive hits, three with 2-outs.

In the third, Enterprise tacked on three more before pitcher Molly Sanders settled down and quashed the rally.

Trailing 9-2, Troy’s Angels staged their attempted comeback in the third inning. Bailey Rushing, Sanders, Armstrong, Scarbrough and Nelsey Leverette scored on bases loaded hits by Scarbrough and Hanna Calhoun to bring Troy within one. Enterprise added two runs in the fifth to pull away.

“We didn’t play well in the first game, all we can do is put that behind us and play them again,” said head coach Larry Sanders.

Enterprise answered in their half with four runs to tie the game.

Things got interesting in the second when Enterprise returned a pitcher to the mound after three coaching visits.

Troy then place the game under protest.

By rule, a pitcher must be removed after the third coaching visit and is ineligible to pitch for the remainder of that game.

Upon further review, umpires upheld the protest and a new Enterprise pitcher was inserted.

At press time Troy was leading 7-4 in the top of the second inning.