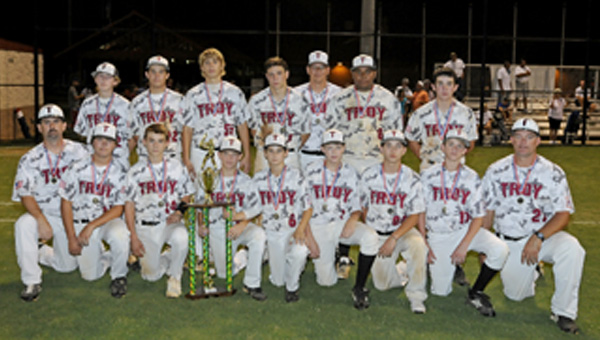 The Dixie Boys secured the district championship after 13-12 slugfest with Ashford..

DOTHAN – Perseverance should be the word of the day for Troy’s Dixie Boys.

Perseverance for Austin Ingram giving up a game tying 2-run homerun with two outs in the top of the seventh then reaching base on a true “hustle” play in order to score the game winning run in the bottom of the inning.

Perseverance for coming back from deficits of three and five runs to take the District 6 championship.

Finally, having the perseverance to overcome every emotion imaginable over the course of seven innings and punch their ticket to the state tournament.

Troy defeated Ashford in a slugfest Wednesday night, 13-12, in a game that would be like something out of a Rocky movie.

Troy tied it at one in the second inning when Hunter Baggett scored on a wild pitch.

Ashford would score five in the third in part to three 2-out hits. In true Rocky fashion, Troy came back swinging.

Jason Fleming and Cole LaBrant would reach base on consecutive singles in the home half of the third. Rush Hixon and Ingram then both drew walks scoring Fleming. Starting pitcher Xavius Burden drove in one with a fielder’s choice. Baggett drove a double into left field to score two more brining Troy within one. For the second time, Baggett tied the game, this time at 6, when Chase Hartley reached on an error.

Hartley, who relieved Burden in the third, allowed three runs in the fourth giving Ashford a 9-6 advantage.

Troy would get one run back on a Burden RBI double.

Reilly Fox, Devin Hooks, and Burden would all add RBI single in the sixth handing Troy their first lead of the game, 12-9.

After Ashford scored one in the seventh, head coach Gary Fox brought in Ingram with two outs. James Lindsey then launched a 2-1 pitch deep into the night to tie the game at 12.

Troy’s perseverance once again prevailed. With one out, Ingram worked the count full before being called out on strikes.

The catcher, however, dropped the ball and without hesitation Ingram raced for first beating the throw by a step. Ingram reached second on a Burden fielder’s choice.

Now with two outs, Fox lofted a deep fly ball into right field that dropped behind the Ashford defender, scoring Ingram and ending the game.

Troy will play host Enterprise in the opening round of the state tournament beginning July 16.

For more stats and commentary on this game, visit www.troymessenger.com.