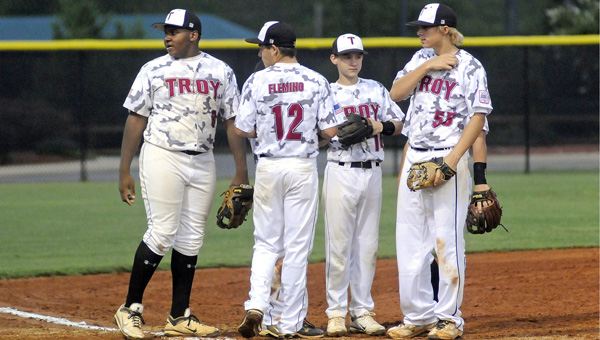 Members of the Troy Dixie Boys team gather before an inning during a district baseball game in Dothan, Ala., Saturday, July 2, 2011. (Messenger Staff Photo/Thomas Graning)

Through four games at the District 6 tournament in Dothan, Troy has been a “smoke and mirrors” team of sorts.

The one thing they have been up-front and clear about is winning.

4-0 in tournament play and primed to take on Ashford in the district title game tonight.

“These guys hustle. I never have to worry about that,” head coach Gary Fox said. “Being state champs last year, they take pride in being the team to beat.”

Xavius Burden has been blunt about his intentions as well batting a strong eight for his last eight.

Reilly Fox and Devin Hooks have also swung hot bats of late. Combined the pair is hitting .533 with four RBIs.

Troy has found a knack for scoring runs late. Fox would like to see his team pull away a little sooner.

“These are good teams we’re playing and they’ve played us tough. I would just like to see a little more offense early. We’ve had opportunities but haven’t converted them into runs.”

So far, Troy has outscored its opponents 42-14.

Troy and Ashford square of at 6 p.m. tonight. Follow me on Twitter at @Messenger_Wes for live game updates.