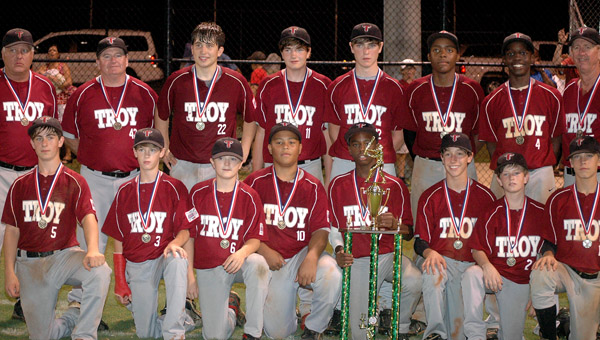 Behind a solid start by Drew Starling, Troy’s Junior Dixie Boys team advanced to the state tournament with a 10-6 win over Dothan Tuesday night.

Starling pitched into the sixth before he was removed due to his pitch count. He allowed just one run on four hits.

Dothan forced the “if-necessary” game by drumming Troy earlier Tuesday afternoon but Kitchens is proud of his boys responded.

“I didn’t have to say anything after that first game. They talked amongst themselves and motivated themselves.”

The district champs would strike again in the third when Keigan Simmons doubled home two runs. Catcher DeAndre Pitts singled in Jerrell Lawson in the fourth making the score 4-0.

Dothan would edge out a run in the fourth after a Troy fielding error.

Troy got doubles from Lawson, Starling, and Ty Witherington in the sixth to help stretch the lead to 10-1.

Dothan would not go quietly, however. The host squad chalked up five runs on five hits in the final frame to make it interesting. Lawson pitched out of the jam for Troy to preserve the win.

Troy will travel to the state tournament in Enterprise July 16-22.