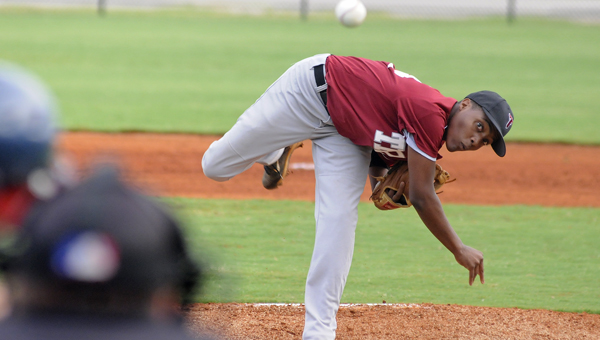 DOTHAN — The Troy All-Stars used clutch pitching from DeAndre Pitts and timely hitting to come away with a surprisingly easy 10-0 victory over the Dothan All-Stars in the 13-year-old Junior Dixie Boys District 6 Tournament on Saturday.

The game took place inside the Miracle Field Complex  at Westgate Park under cloudy and humid conditions Saturday night and was the first for Troy in the round-robin tournament.

Troy (1-0) jumped out to an early lead and escaped several Dothan scoring threats before finally putting away the host team under the 10-run rule in the bottom of the sixth inning.

Troy head coach Sam Kitchens said it was a team effort by everyone involved.

“DeAndre didn’t have his best stuff,” Kitchens said. “He settled down, kept his focus and we made some good plays behind him. We capitalized on a couple of mistakes they made. We got fortunate in that regard. I know they will be ready for us (in case of a rematch).”

The tone for the game was set in the first inning, when Pitts stranded Dothan runners at second and third by getting Chandler Davis to strike out to end the threat.

Troy scored in the bottom of the first when Jerrell Lawson walked, advanced to second base on a passed ball before coming across on a RBI triple by Pitts.

Dothan put a pair of runners on base with two outs in the top of the second before Pitts struck out Logan Herndon to end the inning.

It appeared Dothan starting pitcher Cory McKibben was going to escape with minimal damage after snaring a comebacker to the mound from Drew Starling. However, the Dothan hurler threw the ball over the first baseman’s head and down the right field line. Pitts scored from second base to increase the lead to 3-0. Courtesy runner Kiegan Simmons scored on another Dothan error to cap the inning.

In the bottom of the fifth, Pitts added his second RBI triple of the game and scored on Starling’s RBI sacrifice fly.

Troy finished off Dothan by scoring four runs in the bottom of the sixth. Jarrett Jordan finished out the game with an RBI ground out.

Pitts was the winning pitcher for Troy. He went 5 1/3 innings allowing no runs on just two hits while walking three and striking out eight batters. Lawson came in relief during the top of the sixth and pitched a scoreless two-thirds of an inning.

Despite Saturday night’s big win, Kitchens said there is still plenty of work ahead for the Troy All-Stars.

“It’s a surprise to win,” Kitchens said. “But it’s only one game. We’ve got to win two more games. We’ve got to stay focused and know what our goals are doing whatever it takes to win.”

Troy returns to action on Monday, July 4, when it faces Ozark. The first pitch is scheduled for 6 p.m.